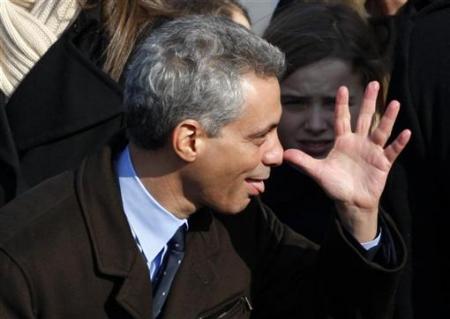 “You think THIS is funny, wait to see what I do when I get into office!”

On this day, we come to proclaim an end to the petty grievances and false promises, the recriminations and worn out dogmas, that for far too long have strangled our politics.

Emanuel didn’t get the memo

“know that you are on the wrong side of history, but that we will extend a hand if you are willing to unclench your fist.”

“Ha! You elected a guy that isn’t qualified to be the President and he isn’t even a U.S. Citizen! Suckers!”

Rahm Emanuel demonstrates the gang symbol of the Bipartisan Crips

thebronze… that BS about him not being a US citizen is exactly that BS… BS from sore losers.

Right on cue, Sky55110/RAP dashes in to piddle on the pages here at FA.

Tell me Sky, do you ever take a break from lapping up the pablum fed to by your party?

Have you ever, even once, tried to attempt any sort of independent thinking?

Look at me, I’m 5 years old working on the mental level of a 3 year old to match the new Messiah and i’ll be making decisions that effect your life.

I looked at his comment and laughed, he seems to be in desperate mode. Is he needing to prove something to us or to himself?

Another steak knife moment adds to the Emanuel legend.

At whom was the gesture directed?

Rahmbo gives his thumbs up to former US Attorney Patrick Fitzgerald.

Somebody needs to cold cock that dirtbag.

Now that’s real class, so typical of the new admin.

This is sure to engender the respect of the U.S. that the left alleges we don’t have anymore from the rest of the world because of President Bush. (right!)

So dignified, eh? Makes one proud of our new government. Not.

All kidding aside, this just shows what an utter lack of judgment he has, or more likely arrogance. On the grandest stage of American politics, knowing that the cameras are on him, and this is what we get.

If my kindergartener made that gesture anywhere, he’d be in a world of trouble.

@Hythloday: [If my kindergartener made that gesture anywhere, he’d be in a world of trouble.]

And that’s exactly about the age he is acting like.

True, indeed. I guess we’ll have to be the adults for the next four years.

I knew Obama was bullshit when he hooked up with this jerk. A guy he should have thrown under the bus is driving it.

Remember when George W. Bush was mocked for being a “hands-off” manager, as if that was the mark of an idiot, instead of a very respected style of leadership? You haven’t seen anything yet – this is a picture of the classy guy that is really running the Obama Presidency! Thanks, MSM! Enjoy your toy President… we sure as hell won’t.

that BS about him not being a US citizen is exactly that BS… BS from sore losers.

My caption:
“Anyone got hope and change for a five?”

My comment:
The thing that strikes me most about this picture is the little girl watching this example of high office and leadership so intently.

Rod Serling (Freeze-Frame Voice Over): Picture if you will… the epitome of Democratic class and culture at it’s finest… You have ventured into… The Obama Zone… (Roll Video)

Hey I remembered to bring the Mardi Gra beads girls…

See Barack! No hair on this palm!!!

And just think, these inept people are appointed to some of the highest offices in the land. This was about as tasteful as the Reverend who closed the inauguration ceremony with his racist poetry. The old saying remains true – “Money cannot buy class”!

Too bad they aren’t as classy as the Clinton zoo, uh, I mean cabinet was.

He needs to be careful where he sticks those fingers I heard he lost a finger on the other hand sticking it up his nose. His eye’s still bug out of his head a bit till this very day.

“Right now, I have no idea which word I intended to pu...
No, The Ukraine War Has Not Stoked A Global Food Crisis.