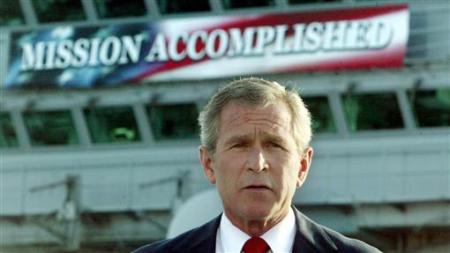 President George W. Bush delivers a speech to crew aboard the aircraft carrier USS Abraham Lincoln, as the carrier steamed toward San Diego, California on May 1, 2003.
REUTERS/Larry Downing


Clearly, putting a “mission accomplished” on a (sic) aircraft carrier was a mistake. It sent the wrong message. We were trying to say something differently, but, nevertheless, it conveyed a different message.

I haven’t visited the lefty blogs, but I can imagine that this will be seized upon as an admission of guilt/wrong-doing.

Every May 1st, the anniversary of the carrier speech (an excellent speech, btw, that still stands today), I can’t help myself but to debunk the spin all over again.

President Bush was gracious enough to express his regrets about the banner, in hindsight; it’s a shame that his critics most likely won’t extend the same and acknowledge that the purpose of the banner was for something other than what it came to signify.

Here are some keynotes:

First off, President Bush never said it. Let’s be clear and accurate here. The words only appear on the banner.

For the crew of the Abraham Lincoln, the mission was accomplished:

the major combat operations were indeed over, in an unprecedented march to Baghdad, and a very quick toppling of Saddam’s regime, using a streamlined military force to defeat one of the largest and what was thought to be one of the most dangerous armies in the world. We predicted huge casualties as the cost for taking Baghdad and Iraq. That didn’t happen. So ended a phase of the war; and for the crew of the Abraham Lincoln, the mission was indeed accomplished. What is going on now, is a separate phase;

a crewman who was present on the carrier to hear President Bush’s speech, mention that the banner was made by the crew, for the crew of the carrier. For them, their mission was accomplished.

A commenter on my blog:

I believe that a lot of people have misunderstood the message of “Mission Accomplished”. It was 3 years ago that the President landed on that fine ship and told me that my husband was coming home. And for him and everyone else on that very long, very stressful deployment their mission was accomplished. Publicity stunt or not it was a great day for many.

Who was responsible for the creation of the banner?

Secretary of Defense Rumsfeld was also someone who didn’t like the banner, nor the “implication of finality”, to which he had taken a critical pen to drafts of the speech that implied any kind of finality and over-optimism. From an interview with Bob Woodward:

MR. WOODWARD: And you know, one thing — just one quick thing not on the list but someone told me about the other day, which I found fascinating. When the person that gave that speech on the Lincoln with the “Mission Accomplished” on the back, somebody told me that the White House speechwriters had used MacArthur’s surrender speech on the Missouri as a model. And they literally had in that speech “the guns are silent,” and you edited it out.

SEC. RUMSFELD: I took “mission accomplished” out. I was in Baghdad, and I was given a draft of that thing to look at. And I just died, and I said my God, it’s too conclusive. And I fixed it and sent it back..

MR. WOODWARD: were you on the trip?

SEC. RUMSFELD: I was. And we got it back and they fixed the speech, but not the sign.

MR. WOODWARD: That’s right. But it had “the guns are silent,” and someone said you line-edited it out and said the guns are not silent.

SEC. RUMSFELD: Yeah. No, there’s no question but that I was well aware that things were still happening there. I was there.

And who was responsible for the inclusion of the banner?

Scott Sforza flew out to the USS Lincoln five days before the speech. Sforza was the White House’s in-house producer.
~~~
In the course of his labors, Sforza became quite taken with the crew. When they mentioned to the White House aide that they would like to emblazon the stage with a banner reading MISSION ACCOMPLISHED so as to send up a victorious signal to their families and Navy buddies, Sforza loved the spirit of it and was effusive in his pitch to Fleischer, Bartlett, and the others. By conference call, they mused among themselves: Could the slogan backfire? But Fleischer reminded the others that the press had been haranguing Bush to declare an end to major combat operations for weeks now. The press shop gave Sforza the green light.

Sforza had the MISSION ACCOMPLISHED banner designed by a private vendor, with a slick red-white-and-blue background. It was unfurled and pinned alongside the carrier, directly behind where the president would give his nationally televised speech on the evening of May 1.

According to Draper’s book, pg196,

(Rumsfeld learned of the banner only after the fact and was not pleased. The final draft of the speech, he would say, “was properly calibrated. But the sign left the opposite impression, and that was unfortunate.”)

Perhaps no one took it harder than Scott Sforza, who knew the truth! The banner- it was for the troops! And everyone was saying that the White House was announcing “mission accomplished”! When anyone could plainly see in the text, plainly hear the president say it: We have difficult work to do in Iraq.

And anyway, no one in the media bothered to call Sforza and find out what the facts were. This was what so galled him. Because Sforza had worked with the great ones, Koppel and Brinkley and Roone Arledge, back in the day when reporters weren’t hired just for their looks. It was quite a somber epiphany for the man who had spent the past week adjusting lights and divining camera angles and dressing up crew members in matchning colors….

The media- they just don’t pay attention to facts the way they used to.

The dishonesty of the left:

The other video that the above is a response to has since been made private. I guess the knucklehead finally got embarrassed by exposure to his deceit/conspiracy. Mission accomplished!

I think I saved a copy of it in my files. Maybe I’ll get Curt to upload it here. 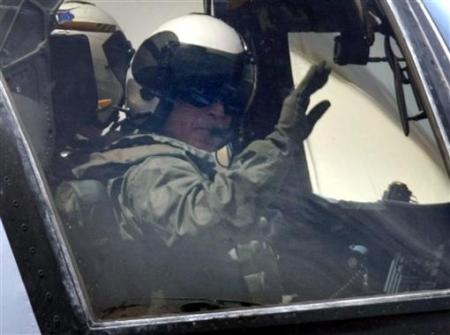 President George W. Bush waves from the cockpit onboard an S-3 Viking as he prepares to takeoff to fly out to the aircraft carrier USS Abraham Lincoln from Naval Air Station North Island, San Diego May 1, 2003.
Bush was flying out to greet the 5,000 sailors aboard the Lincoln as they return home from the war in Iraq.
REUTERS/Mike Blake
0 0 votes
Article Rating
Wordsmith

The whole thing was a storm in a teacup. Finishing the war and winning the peace are different things.

And after O’Bunko screws it up, the Left can say “See, Bush was wrong all along.” Of course, with the mess he will make of the USA, no one will have time to notice.
http://atlasshrugs2000.typepad.com/atlas_shrugs/2009/01/obama-decimating-untel-why.html

And what’s with the Brits giving us a hard time about Iraq, when they’ve got their own little Islamic revolution going on there?
http://gatewaypundit.blogspot.com/2009/01/uk-muslim-peace-protesters-chase-police.html
They’re hardly the ones to tell America that we’re doing things wrong.

@yonason
That’s right – no one can ever give an opinion if there are protestors in their own country. I guess using that logic that means until the Right wing can silence it own protestors in the US then you should STFU as well -lol

It’s up to the poeple of Iraq to win their own peace. Bush got them to the point where they can do it themselves, and that’s as far as he needs to go. If they don’t keep what they’ve been helped to achieve, it isn’t his fault, it’s theirs.

And, it’s more than just a few protestors in the UK, it’s capitualating to them and nurturing them – and as fast as France, no less (or so it appears from here).

In the last eight years, Bush changed the tone of Washington, but Washington refused to return the favor.

The UK isn’t capitualing to Islamic extremists. At least not since I was there back in June! You shouldn’t believe everything you see in the press. If we took every bizarre story in the US to represent the norm or believed every protest group in the US as representing the majority view then the US would be in serious trouble. Demostrators are demostrators – the don’t usually don’t represent those in power. Of course we have the PC brigade but that idea been an unhappy import from the US since the 80s – maybe earlier. But most Brits don’t take much notice of that.

BRING OUT YOUR DEAD

Yeah, everything you saw there was normal. Well, next time, try opening your eyes when you’re there.

Oh, and I understand you’ve had to clip those crows’ flight feathers to keep ’em in the tower vacinity. That’s cheatin, ya know.

@sarge charlie: Link it here. Would love to read it.

When were you in the UK last Yonason?

Word, I sent this to WLS890am this morning. They were discussing the banner Monday morning on the “Erich ‘Mancow’ Mueller” show. I didn’t get to hear the whole discussion, but what I did hear wasn’t quite accurate. Hope he reads through your information. Thanks for putting this together!

“When were you in the UK last Yonason?”

In the late 70’s, and it was all I could do even then to find an Englishman.

Where was that – London I presume?

As an aside, one thing I proved is that you can actually campaign on the issue and get elected. In other words, I don’t believe talking about Social Security is the third rail of American politics. I, matter of fact, think that in the future, not talking about how you intend to fix Social Security is going to be the third rail of American politics. — George W Bush