The Burden of Peace is on Hamas and Palestinians

Mataharley was suspicious of some possible fauxtography going on with the photo below. American Power confirms the suspicion, through one of his commenters, reliapundit:

No one is unaffected by the civilian casualities. But it’s precisely images like these which are used by Hamas for diabolical propaganda puposes.

French public television network France 2 on Tuesday revealed they had aired photographs that allegedly showed destruction caused by the Israel Air Force during Operation Cast Lead, which were in fact taken during a different incident in 2005, one in which Gaza civilians were killed by an explosion caused by militants in the Strip.

The footage aired on Channel 2 on Tuesday afternoon showed dozens of dead bodies, including Hamas gunmen and citizens, which the channel said were killed by an IAF bombing raid on January 1st. It later came to light that the channel had instead aired footage of the devastation caused after a truck full of explosives blew up in the Jabaliya Refugee Camp.

A news editor at France 2 told Le Figaro Tuesday that they had “made a mistake by airing those pictures, which he said depict events from 2005. 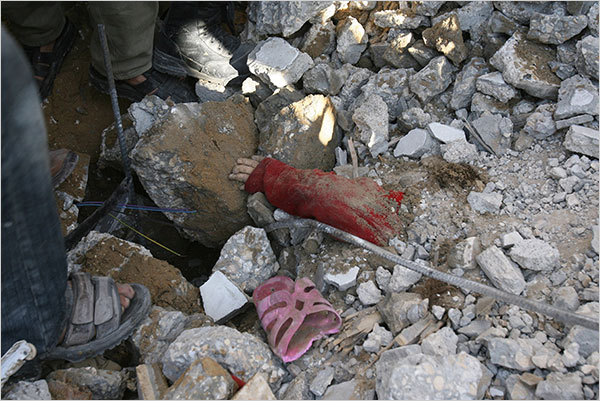 A girl was among the dead in the air strike. About 30 people were inside the house when it was destroyed, neighbors said.
Photo: Mohammed Abed/Agence France-Presse — Getty Images

No, I’m not overjoyed by innocent civilian deaths. Especially that of children. I’ve seen some comments by callous political allies who excuse it in terms of “So what? They’re indoctrinated to be future terrorists and America and Israel haters, anyway.”

We should never stop caring, even as we support what needs doing: namely in this case, Israel defending itself. And yes, this is a defensive response. It’s so odd to argue “disproportionate force” by Israel, when it’s obvious that it’s not disproportionate enough so long as Hamas is still delivering rocket attacks.

JERUSALEM, Jan. 6 — Israeli shelling near a U.N.-run school in a Gaza refugee camp Tuesday killed at least 30 people, many of whom had gathered at the school building to flee the ongoing clashes between Israeli troops and Hamas fighters, Palestinian and United Nations officials said.

In response to the news of the shelling at the Al-Fakhora School, the Israeli military said in a statement that Israeli forces were responding to attacks.

“Initial inquiry by forces on the ground indicates that a number of mortar shells were fired from within the school at [Israel Defense Forces],” the military statement said. “And in response the forces fired several mortar shells back at the source.”

Military spokesmen said they did not yet have an explanation for air strike at the other school Monday.

Here’s an interesting blog belonging to the mother of an Israeli soldier (Hat tip for the find: American Power). Her current entry:

Today, in Gaza, a school was hit by an Israeli missile. The Palestinians claim dozens have died. It’s a horrible thing, a terrible tragedy, every parent’s nightmare.

Except that Israel’s initial inquiry into the incident, showed that the missile didn’t hit the “school” by mistake. The target was true; the aim was accurate. In August, last year, Israel filed a formal complaint with the United Nations, complaining about the school being used to fire against Israel. Israel has already identified Hamas gunmen who were killed at the scene of the attack – even publicized their names.

The proof that the building was a legitimate target was found, once again, in the secondary explosions that occurred. The missile hit the building, causing explosives inside the building to detonate. You can watch these and other videos on the web. You’ll see the initial explosion, and then, mere seconds later, multiple explosions and objects shooting high into the air.

If you hit a building that has no explosives, the building collapses and the only thing that rises into the air is dust and rubble. Nothing explodes – again, see all the videos of houses hit in Sderot, Ashkelon, Ashdod, Beersheva. As horrible as it sounds, as tragic as the results are, the missile was accurate. It hit its target and did what it was supposed to do. Secondary explosions prove that the building was used to store rockets.

What it comes down to is a building from which mortars were shot, in which explosives were stored, and in which, Palestinians chose to teach their young. There is something incredibly sick about that.

There are rules in warfare and in life.

One rule: A civilized people should not target innocent civilians. This is what Hamas repeatedly has done for the last 8 years. This is NOT what Israel did today.

Second rule: An innocent civilian should not protect a terrorist location. If you are in a training camp – leave. If you are near a rocket launching site – run, and if you are sending your children to a school where rockets are stored and missiles and mortars are launched, be smart and stop sending your child because the government against whom those rockets and mortars are being shot, has the right to defend itself. School is important, but as Israel has shown in the last few days by canceling lessons, nothing is as important as life.

And there is an even more sinister issue here lurking under the surface of this story, one that I hope will come to light in the next few days. The United Nations and its involvement in Gaza is one that is as suspect as its involvement in Lebanon was years ago. Too often, they are “at the scene” and too often, they allow their “sanctuaries” to by used by terrorists who attack Israel. Their ambulances have been used by gunmen, and their school to be used as a launching ground for mortars.

Today Israel hit a target – a legitimate target used to launch mortars against our people. If, in addition to shooting mortars, that building was also used for classes, that doesn’t make it a school. A school should be a place of knowledge and growth. A school should be a place of safety and it seems rather obvious to me that a missile launching pad isn’t a safe environment, and therefore, no matter what the United Nations calls that building in Gaza, it was not a school.

A school cannot be a place for mortars…and a place with mortars cannot be a school. Golda Meir once said that there would be peace when the Arabs love their children more than they hate us. Decades after she said that, generations have come and gone, and still that day has not arrived.

When Hamas launched hundreds of unanswered rockets into Israel, where was the public outcry? Where were the peace activists? Where was the UN Security Council, condemning Hamas for perpetuating a “cycle of violence”? How about when an al-Qaeda faction in Gaza claimed responsibility for rocket attacks in November? 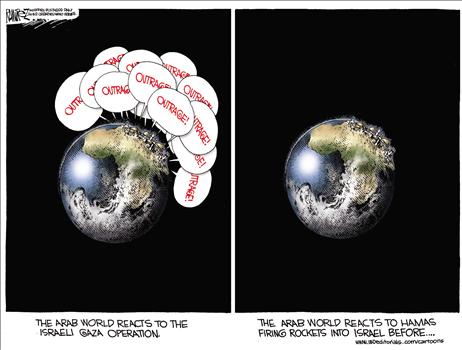 When the sleeping giant is finally stirred to take action to defend itself, now the anti-war crowd is vocal? Now the world community is stirred? Condemning the side who has bent over backward for decades, aching for peace, while supporting the side that has sued for nothing less than the destruction of Israel?

Israel tried appeasement when they gave up the Gaza Strip, uprooting 9,000 Jewish settlers from their homes. Such acts of appeasement only encourages more violence from those who refuse to acknowledge that the other side has a right to exist; it perpetuates the cycle of violence:

The rocket attacks by Hamas weren’t a response to violence, but rather an answer to withdrawal–Israel’s controversial 2005 decision to put a unilateral end to Israeli occupation of Gaza. Concessions actually produce a more reliably violent response from Islamic terrorists than do decisive military actions.

Hamas and the Palestinians who support the terror organization only know how to destroy:

Isn’t the New Era of Peace that was ushered in by the Israeli withdrawal from Gaza just wonderful? You may recall that some American Jews raised millions of dollars to buy the greenhouses and give them to the Palestinians, so that the poor things wouldn’t suffer any economic difficulties. Moral blindness, dhimmitude, naivete, and more — as I said at the time.

From the Jerusalem Post, with thanks to Sr. Soph:

Several greenhouses belonging to the former settlement of Morag in the Gaza Strip were destroyed over the weekend during an attempt by dozens of gunmen to take control of the area.

The Palestinian Company for Economic Development, which is in charge of thousands of greenhouses that used to belong to Morag and other settlements in Gush Katif, said the attack, which took place on Friday, was the latest in a series that began almost immediately after the settlements were evacuated.

The company revealed that hundreds of greenhouses and other agricultural installations have been sabotaged over the past few months, expressing its outrage over the recurring phenomenon. The company issued an urgent appeal to Palestinian Authority Chairman Mahmoud Abbas, Prime Minister Ismail Haniyeh and Interior Minister Said Siam to intervene to halt the attacks on the lands belonging to the former settlements.

“These greenhouses and other installations and projects provide a source of income for over 4,500 families,” company officials said. “We are very disturbed by the recurring attacks and thefts. Such actions jeopardize the largest agricultural project carried by the Palestinian Authority after the Israeli withdrawal.”

Why destroy what was given over to them for the purposes of growing food and encouraging prosperity? As Michael Medved put it on his radio program yesterday, because these greenhouses had “Jewish cooties”.

“Instead of caring about the people of Gaza, Hamas decided to use Gaza to use rockets to kill innocent Israelis,” Bush told reporters at the White House. “Israel’s obviously decided to protect itself.”

Bush said he agreed with Israel’s position that a truce would be a waste of time unless Hamas is somehow prevented from resuming attacks. “I know people are saying, ‘Let’s have a cease-fire,’ ” Bush said. “And those are noble ambitions. But any cease-fire must have the conditions in it so that Hamas does not use Gaza as a place from which to launch rockets.”

Israel- while not perfect- has done much to extend the olive branch for decades now, aching to co-exist. The problem isn’t Israel. The problem is with Hamas and those Palestinians and Arabs who refuse to recognize Israel’s right to exist.

The world community wants peace and “cease-fire”? A cessation of violence? Take it up with Hamas; not with Israel. 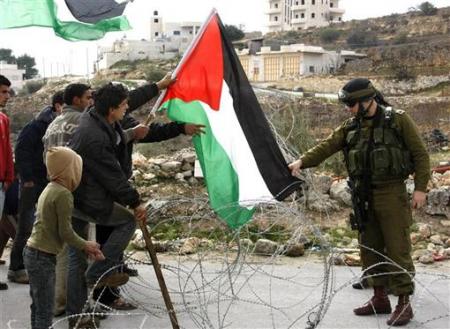 An Israeli soldier (R) helps Palestinians to unhitch a flag entangled in barbed wire during a protest against Israel’s offensive in Gaza in the village of al-Masara, near the West Bank town of Bethlehem January 2, 2009.
REUTERS/Eric Gaillard
Wordsmith