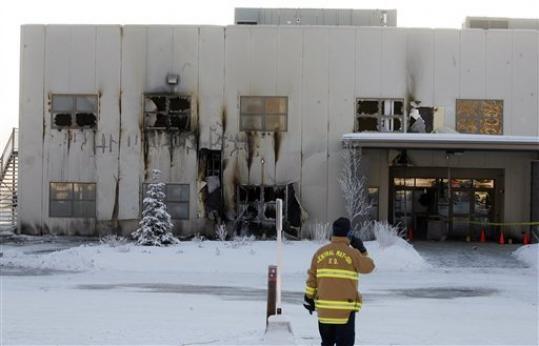 It seem to me some people are still not satisfied with merely the political defeat of the General Election. Some unknown party decided to send a message.

Although no-one is taking credit for this and there is nothing to prove this was a politically-motivated act. It’s too coincidental IMO opinion to ignore outright. Is it also a coincidence that this occurs so soon after the arrest of Chicago Governor “Hot Rod” R. Blagojevich and the implications of potential links to the Obama Administration? Was this a random act, intended as a warning to Sarah not to run in 2012, or to Conservatives in general to “back off on their scrutiny or else”?

Attempts to burn churches to try to cast fear in the hearts of the religious of our society through such heinous acts committed by the truely dispicable are an unfortunate part of world history. Kinda’ brings to mind the old Chicago Politics of “setting an example to others” from the “Bootleg Era”, or the reactions in the Southern Democrat controlled south during to the Civil Rights Movement, and similar acts against Judeau-christianity in socialist nations; As in the attempted censure and oppression of three young children in Portugal when their visions of the Lady of Fatima became known to the ruling Socialist Party.

What must infuriate the perpetrators is; their meaningless acts of terror never works out the way they wish. The faithful do not loose heart or give up their faith in disgust. It merely serves to bring them together in mutual support and they just find someplace else to worship while rebuilding takes place. As with 9-11, they regroup and go on.

(CNN) — A “suspicious” fire devastated the church attended by Alaska Gov. and former vice presidential candidate Sarah Palin on Friday night in her hometown of Wasilla, the church’s minister said.

“We have no idea what caused it,” the Rev. Larry Kroon of the Wasilla Bible Church said Saturday, adding that investigators were considering arson and other possible causes.

A ladies’ craft group was in the building when the fire broke out, but they got out safely, Kroon said.

Central Mat-Su Fire Department Chief James Steele said the department was “treating it as suspicious and as potential arson at this point” but did not elaborate, The Anchorage Daily News reported.

The newspaper said Palin released a statement after the fire in which she said she stopped by the church Saturday morning and offered an apology to the assistant pastor “if the incident is in any way connected to the undeserved negative attention the church has received since she became a vice presidential candidate.”

Steele said that as many as 40 firefighters from his and neighboring departments fought the blaze, which started about 9:40 p.m. Friday (1:40 a.m. ET Saturday).

Steele said that as many as 40 firefighters from his and neighboring departments fought the blaze, which started about 9:40 p.m. Friday (1:40 a.m. ET Saturday).

Firefighters were on the scene dealing with hot spots until about 5 a.m. Saturday, the Anchorage Daily News reported.

The metal church building, which normally accommodates Sunday congregations of up to 1,000 people, was heavily damaged by flames and smoke, Kroon said.

“The fire investigators and insurance people are there now. There’s definitely a lot of damage. I’ve heard the figure of $1 million, but I don’t know for sure,” he said.

Kroon said he was not at the church when the fire broke out and would not discuss what any of the church members who were there had reported to him.

He would not specify how many people were in the building at the time of the blaze.

“They were all adults, and they all got out. We’re trying not to talk about specifics while investigators are still working on finding out what happened.”

Here’s a portion of another story on it from AP:

Palin, who was not at the church at the time of the fire, stopped by Saturday. According to McAllister, Palin told an assistant pastor she was sorry if the fire was connected to the “undeserved negative attention” the church has received since she became the vice presidential candidate Aug. 29.

Worshippers acknowledged the possible Palin connection with the fire, but more in a “gee, maybe” sort of way, said Rob Tracy, who shuttled people to the school for services. But people are speculating about other motives.

The reports in these two stories claim that there were only adults inside the building when the fire was started. The Huffington Post reports there were children inside:

Damage to the Wasilla Bible Church was estimated at $1 million, authorities said Saturday. No one was injured in the fire, which was set Friday night while a handful of people, including two children, were inside, according to Central Mat-Su Fire Chief James Steele.