What Did Obama Know and When Did He Know It?

Doug Ross has even more evidence that Obama discussed his senate seat with Gov. Blagojevich, this source, the Chicago Tribune, makes the fourth article referencing the meeting:

Gov. Rod Blagojevich on Thursday cited the potential for bad “karma” and avoided discussing potential Senate successors to Barack Obama should the Democratic nominee win the White House, but acknowledged he has a process in mind for making the most important appointment of his career.

“I just don’t want to jinx him and I don’t like the karma of me thinking that far ahead,” Blagojevich said of Obama’s prospects in Tuesday’s election. The governor added, “We have had some discussions about a process which we’ll share … if all goes well.”

Sources close to Blagojevich, who asked not to be named because they were not authorized to speak for him, said one issue would be to consider who could most help the governor politically.

“What helps me in my quest for the future, whether it’s re-election or legacy?” one Blagojevich confidant said of the selection process being eyed by the Democratic governor, who has seen his job approval rating fall to staggering levels. “It’s a big milestone.”

Hot Air has this photo, placed on the Governors website on November 12th: 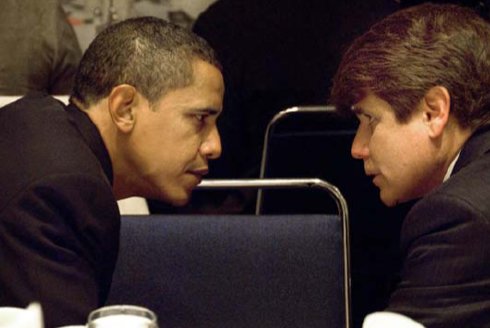 1 – “Did you communicate directly or indirectly with Blagojevich about picking your replacement in the U.S. Senate?”

2 – “Why didn’t you or someone on your team correct your close adviser David Axelrod when he said you had spoken to Blagojevich about picking your replacement?”

3. “When did you learn the investigation involved Blagojevich’s alleged efforts to ‘sell’ your Senate seat, or of the governor’s impending arrest?”

4 – “Did you or anyone close to you contact the FBI or U.S. Attorney Patrick Fitzgerald about Blagojevich’s alleged efforts to sell your Senate seat to the highest bidder?”

5 – “Did federal investigators interview you or anyone close to you in the investigation?”

6 – “When did you and Blagojevich last speak and about what?”

7 – “Do you regret supporting Blagojevich?”

He was asked two of those questions this morning:

Asked if he or his people had interacted with Blagojevich or his office about filling the vacant Illinois Senate seat, Obama said he, personally, had not.

But he left the door open to the possibility that his aides may have and promised that he would reveal the results of an investigation of any such interactions “in the next few days.”

He said: “what I want to do is gather all the facts about any staff contacts that may have taken place between the transition office and the governor’s office.”

He asserted, though, that no one on his staff engaged Blagojevich in his alleged efforts to trade the Senate seat for personal benefit.

Asked if federal investigators had contacted him or his people in the course of the investigation, Obama said that neither he nor his people had been interviewed.

“We had no contact”……sounds quite familiar doesn’t it? “I did not have sex with that woman,” yeah…rings a bell.

Basically this all comes down to what did he know, and when did he know it. Will the MSM ask the tough questions? Run down every lead? Shake the bushes? Based on past history I highly doubt it but a few may, like the Wall Street Journal:

What remains to be seen is whether this episode will put an end to what Chicago Tribune political columnist John Kass calls the national media’s “almost willful” fantasy that Mr. Obama and Chicago’s political culture have little to do with each other. Mr. Kass notes that the media devoted a lot more time and energy to investigating the inner workings of Sarah Palin’s Wasilla, Alaska, than it has looking at Mr. Obama’s Chicago connections.

To date, Mr. Obama’s approach to Illinois corruption has been to congratulate himself for dodging association with it. “I think I have done a good job in rising politically in this environment without being entangled in some of the traditional problems of Chicago politics,” he told the Chicago Tribune last spring. At the time, Mr. Obama was being grilled over news that he bought his house through a land deal involving Tony Rezko, a political fixer who was later convicted on 16 corruption counts. Rezko is mentioned dozens of times in the 76-page criminal complaint against Mr. Blagojevich.

Mr. Obama has an ambiguous reputation among those trying to clean up Illinois politics. “We have a sick political culture, and that’s the environment Barack Obama came from,” Jay Stewart, executive director of the Chicago Better Government Association, told ABC News months ago. Though Mr. Obama did support ethics reforms as a state senator, Mr. Stewart noted that he’s “been noticeably silent on the issue of corruption here in his home state including, at this point, mostly Democratic politicians.”

One thing the WSJ points out is that many lawmakers in Illinois were disgusted with Blagojevich and wanted him impeached. Illinois senate president Emil Jones, the man who helped Obama get that Senate seat, didn’t like the calls for impeachment and said so loudly. What would Obama do?

Many people were curious who Mr. Obama would side with in the dispute. Would it be with those Democrats who wanted to move aggressively against an apparently corrupt governor or with his old Chicago ally, Mr. Jones, who preferred to wait? Mr. Obama did neither. He kept silent. (I emailed the Obama campaign about Mr. Blagojevich’s problems in June, but my question was ignored.)

He acted like he always did. Took neither side and stayed in the shadows.

Classic Obama…..get the popcorn out folks