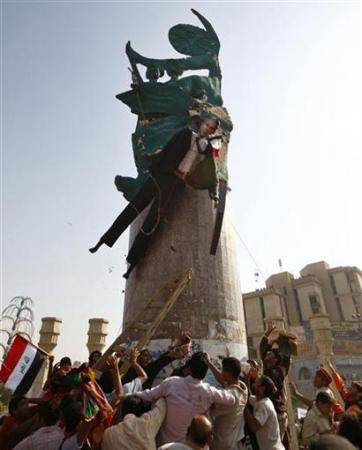 Demonstrators hang an effigy of U.S. President George W. Bush during a rally at the al-Firdous square in Baghdad November 21, 2008.
REUTERS/Thaier al-Sudani

Yesterday, many conservative bloggers joined in to dare to declare November 22nd, Victory in Iraq Day. Based on the above photo, I’d say declaration of victory is premature…

You see…..burning effigies of “selected not elected” President Bush is soooo yesterday; and soooo lame and unimaginative….mmmkay? Yes, freedom and democracy are flourishing in Iraq; but until Iraq’s own moonbats can come up with colorful protests like this against the imperialistic, fascist dictatorial evil Bush regime: 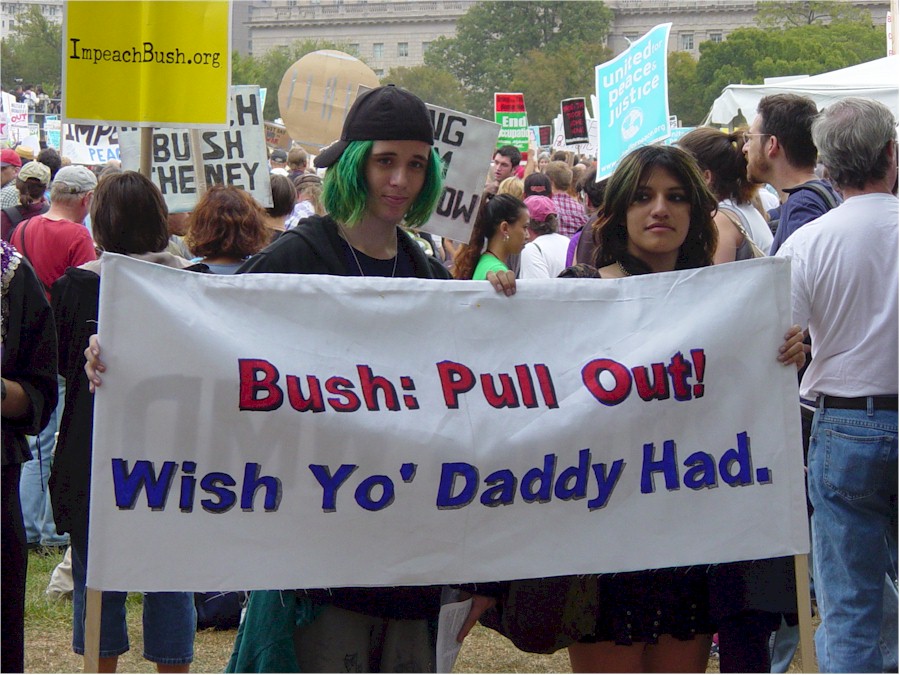 …….and get away with it, unmolested by the government….

Looks like the protesters are Shiite hardline followers of Moqtada al-Sadr. So no real surprises. They aren’t happy with SOFA; but the defense minister warns of the dangers of a premature U.S. pullout and the prime minister says it’s the best roadmap toward restoring Iraqi sovereignty.

Before you know it, they’ll be voting on their own Prop 8, with activists rampaging through the streets, not taking “yes” for an answer.

This Iraqi interpreter has even quit wearing his mask.

Actually, I think our time is nearing when it is time to withdraw most of our forces out of Iraq. Iraq should succeed or fail based upon its own merits of self-rule and self-determination. No more apron-strings. And if it fails, if things head south of success, it should not be an indictment of the original decision to remove Saddam. The decision to stay; the decision to surge. The decision to withdraw. And I stand by the justifications put forth for ending Saddam’s reign, to this day. In fact, even more so today than I did back when.

I think it would be humorous to know exactly what percentage of young males go to such rallies either to meet and ogle females like “bumper sticker girl” or because their GFs dragged them away from “Guitar Hero” (under threat of bedroom embargo) to help hold the stupid sign.

As for the Mookster’s thugs burning an effigy… Imagine Saddam had had himself a super tight ally. One who literally bankrolled him and was fixing up his entire country. What do you think Saddam would have done to protesters who hung and burned such an ally in effigy? Those protesters would have gotten the chance to meet Saddam’s sons up close and personal… in a dark basement room…with electrodes in awkward places.

Was there an actual story attached to the effigy photo? If that story did not include protesters and government troops shooting each other, then I would have to take it as an affirmation of victory, not the opposite. As you stated, the time is rapidly drawing nigh to stop holding the bike up and pushing, and let the Iraqis wobble down the sidewalk on their own. We did not enter Iraq to establish a colony, or to make all of them love us. We gave them freedom, and part of that would be the freedom to love us or hate us as they choose.

Those idiots will miss Bush sooner than they think. This country will never be safe anymore with THE ONE and his American’s haters.

Who took the photos? Are you sure they are all from Iraq?

Good question – looks like a typical scene from downtown San Francisco to me.

I’ll not let this one photo tarnish VI Day.

Will they be protesting during the Obama Admin, or was their protest dependent upon who is President more than what the policy is? (rhetorical question)

(AP) — A female suicide bomber blew herself up near an entrance to the U.S.-protected Green Zone and a bomb tore through a minibus carrying Iraqi government employees in separate attacks on Monday that killed at least 20 people, Iraqi officials said.

Three more people were killed in bomb attacks on police patrols in Baghdad and Baqouba, northeast of the capital, police said.

The violence came as Iraqi lawmakers prepared for a vote Wednesday on a security pact with the United States that would enable American forces to stay in Iraq for up to three more years under strict Iraqi oversight.

Personally I didn’t think “Victory Day” was a great idea; there’s a lot of room here for egg on our face. But since it was organized by Gathering of Eagles, many conservative blogs, and the desire to boost morale and show appreciation for the hard-won efforts of our military and coalition forces when every day has been declared “defeat day” by msm, might as well move with the herd and lend support.

Iraq isn’t going to be perfect for a long, long time. That said, these suicide bombings are happening less and less frequently. If all the media does is telegraph it to create the impression that there’s still an epidemic problem, it undermines confidence and it plays right into the hands of the enemy who want to create big splashes in media headlines; to still be relevant; to sabotage reconstruction efforts and the will of the Iraqis and Americans.

What is important and what is victory, is that we get to a point where Iraq is strong enough to defend itself and take on the grunt work and brunt work. They are already doing much of this, with U.S. forces in support position, rather than in the lead.

BAGHDAD, Nov. 24 (UPI) — One of two bombers who struck in Baghdad Monday was a mentally disabled woman whose explosives were detonated by remote control, officials said.

Brig. Gen. Qassim Atta, an Iraqi military spokesman, told CNN the incident outside the city’s Green Zone was the latest in a series of terrorist bombings in which woman have been used to launch attacks.

At least 18 people, including 15 women, died in the two Monday attacks, officials said.

In the Green Zone incident, two women — one reportedly pregnant — were among the five victims when an explosives vest strapped to the mentally disabled woman detonated in a line of workers waiting to be searched at a checkpoint, The Times of London reported.

The Green Zone, also known as the International Zone, houses Iraqi government offices and the headquarters of U.S. forces in Iraq.

In an earlier explosion, 13 women died on a bus taking them to work at the Iraqi Trade Ministry building when the vehicle was blasted by a so-called sticky bomb attached to its side, the newspaper said.

A U.S. military spokesman said that two Iraqi army members and three civilians were among the dead in the second attack.

The violence came as Iraqi lawmakers prepared for a vote Wednesday on a security pact with the United States that would enable American forces to stay in Iraq for up to three more years under strict Iraqi oversight.

The irony here, is that if insurgents and shiite supporters of Moqtada al-Sadr want U.S. and Coalition forces to leave, all that needs to happen is for the violence to melt away. If that bombing was meant to influence Iraqi lawmakers, don’t you think it’d influence all to support the SOFA?

“[…]. That said, these suicide bombings are happening less and less frequently.”

Perhaps suicide bombing are, but these are on the rise.

(Reuters) – Iraqi and U.S. officials are concerned about an apparent surge in “sticky bombs,” explosives fixed to vehicles with magnets or glue, as a tactic for assassinating Iraqi officials.

The use of such small explosives by Sunni insurgents and Shi’ite militiamen is not a new phenomenon in more than five years of war in Iraq.

But U.S. and Iraqi security officials are paying renewed attention on the bombs in the last two months, especially in the capital Baghdad.

“It seems we have had an uptick, 21 sticky bombs in the last month of October (in Iraq),” U.S. military spokesman Lieutenant Colonel Steven Stover said.

This is the fourth the fourth consecutive day of rising violence in Baghdad.

Iraq will be violent for a long time to come, it really has not changed that respect from the 8th century, but from a military perspective, we won.

“This is the fourth the fourth consecutive day of rising violence in Baghdad.”

You miss the glaringly obvious point that the victims are all Iraqis.

I’ll leave it as an exercise for the class to figure out why this is important.

Re the top photo: From the back the guy in the center looks a lot like Geraldo Rivera. And isn’t that Michael Moore to the far right-side? (Gee, no one would ever expect to find him hiding there.) Are you sure that picture wasn’t the MSM celebrating Obama’s beating George Bush in the presidential election. (Those wacky Dems still seemed to forget that Bush wasn’t running, so why bother trying to correct them now.)

Why stop with “Victory in Iraq Day”, wingnuts? Why not have a “Victory in Vietnam Day” “John McCain Presidential Victory Day,” “Thank You GWB for 8 Great Years Day”, “Cubs win World Series Day”!

And you wingnut ladies can join in with “My Right-Wing Husband Gives Me an Orgasm EVERY TIME Day”!

Shoot, you all can even get the celebrating started four years early with “Palin/Joe the Plumber 2012 Landslide Victory Day”!

Soothsayer is the load his mom should have swallowed.

If you are familiar with posters at AJ’s Strata-sphere, note, that one is no longer there, for good reason.

You beat me to it by just a few minutes.

AJ has the patience of a Saint, I was amazed that it took him so long to ban it and all of it’s tentacles.