The Intolerance of Liberal Activists and a T-Shirt Experiment 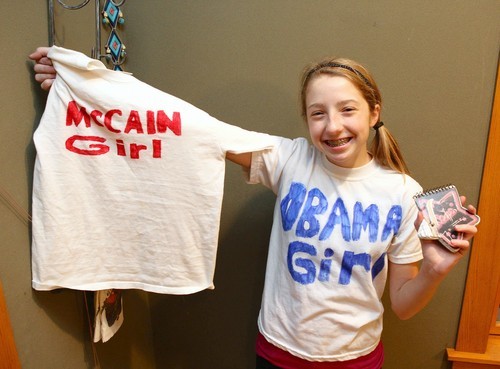 In the weeks before the election, I noticed a growing number of my fellow citizens wearing Obama’s face on their t-shirts, usually in the spirit of socialist realism art. There’s not a politician alive who I admire enough to the point of worshipful adoration that I’d sport his likeness on my clothing or plaster it all over the wordsmobile (I do, however, wear my FA t-shirts with pride and enthusiastically tell people it’s a right-wing website when asked).

The only pro-McCain t-shirt I have seen in person was worn by a lone demonstrator in front of the house where an effigy of Sarah Palin was hung, supposedly in the spirit of Halloween. And even his didn’t sport McCain’s face on it.

I know that even in blue state California, here in the Los Angeles area, there were more than just a handful of McCain-Palin supporters. Yard signs and bumperstickers were more common; just not the t-shirts. And I’m sure a big part of that has to do with the intimidation factor.

There seem to be more loud activists on the left than on the right. Conservatives seem to not want to make a nuisance of themselves; but many liberals have no problem wearing their politics on their sleeves, on their t-shirts, on their cars. It’s apparently an automatic given that the whole world hates Bush; that’s why, in open public and broad daylight, they can say something derogatory about President Bush and feel safe in not getting called on it. Even amongst strangers.

The sad fact is, liberals, through the education system and through media and Hollywood pop culture, have been “allowed” to define and characterize conservatism. The Republican Party has been branded as the party of the rich; warmongers and war profiteers; racists and bigots. If you don’t believe in the alarmism of global warming, you are a “denier” and don’t care about the planet; if you believe in closing the borders, assimilation, and controlling immigration, then you’re against diversity and appreciation for the beauty of other cultures as well as anti-Mexican. And on and on, it goes…

I did not see one- NOT ONE!- “yes” on Prop 8 sign or button or bumpersticker. But I saw the “No” on Prop 8 placards around, perhaps even more than Obama signs. I thought it might pass, given that California voters had already “been there, done that” with Prop 22. What truly makes me livid about the issue, is how liberal activists once again are the ones who get to frame the debate. They’ve painted it as “the next good fight” in the struggle for civil rights and equality; and anyone who stands in the way is a bigot and a hatemonger, with backward religious beliefs and narrow-minded intolerance. Frankly, as someone rather agnostic on the issue, the bigotry and intolerance that I see is all coming from the self-righteous activists who won’t take “yes” for an answer and allow the majority rule to decide.

If you walk around with a “Yes” on Prop 8 sign the stigma is that you are a homophobic bigot and religious nut. You are the radical. Not the other way around. It’s also amusingly not funny to me that these activist bullies targeted the Mormon Church but not black churches when 70% of blacks voted “yes” on Prop 8. Ah, but I digress….

My post is actually about 14 year-old Catherine Vogt and her t-shirt experiment.

As the media keeps gushing on about how America has finally adopted tolerance as the great virtue, and that we’re all united now, let’s consider the Brave Catherine Vogt Experiment.

Catherine Vogt, 14, is an Illinois 8th grader, the daughter of a liberal mom and a conservative dad. She wanted to conduct an experiment in political tolerance and diversity of opinion at her school in the liberal suburb of Oak Park.

She noticed that fellow students at Gwendolyn Brooks Middle School overwhelmingly supported Barack Obama for president. His campaign kept preaching “inclusion,” and she decided to see how included she could be.

So just before the election, Catherine consulted with her history teacher, then bravely wore a unique T-shirt to school and recorded the comments of teachers and students in her journal. The T-shirt bore the simple yet quite subversive words drawn with a red marker:

“I was just really curious how they’d react to something that different, because a lot of people at my school wore Obama shirts and they are big Obama supporters,” Catherine told us. “I just really wanted to see what their reaction would be.”

Immediately, Catherine learned she was stupid for wearing a shirt with Republican John McCain’s name. Not merely stupid. Very stupid.

“People were upset. But they started saying things, calling me very stupid, telling me my shirt was stupid and I shouldn’t be wearing it,” Catherine said.

Then it got worse.

“One person told me to go die. It was a lot of dying. A lot of comments about how I should be killed,” Catherine said, of the tolerance in Oak Park.

But students weren’t the only ones surprised that she wore a shirt supporting McCain.

“In one class, I had one teacher say she will not judge me for my choice, but that she was surprised that I supported McCain,” Catherine said.

If Catherine was shocked by such passive-aggressive threats from instructors, just wait until she goes to college.

“Later, that teacher found out about the experiment and said she was embarrassed because she knew I was writing down what she said,” Catherine said.

How often do you suppose this happens in the classroom? Often, I believe. I work with a lot of kids and it sounds like liberal indoctrination is all too common. Outing oneself as belonging to a conservative Republican family, and the child is subjected to ridicule from the herd mentality of children who have been told Democrats are “the good guys” and Republicans are basically “evil and selfish”.

One student suggested that she be put up on a cross for her political beliefs.

“He said, ‘You should be crucifixed.’ It was kind of funny because, I was like, don’t you mean ‘crucified?’ ” Catherine said.

Other entries in her notebook involved suggestions by classmates that she be “burned with her shirt on” for “being a filthy-rich Republican.”

Some said that because she supported McCain, by extension she supported a plan by deranged skinheads to kill Obama before the election.

I’ve heard some deranged liberals accuse McCain of being a racist. Absolutely laughable, given one of the most under-reported items regarding Senator McCain is that he and Cindy have a Bangladesh daughter, Bridget, adopted from Mother Teresa’s orphanage. McCain did not politicize the touching story of how this daughter came into their lives, nor make an issue of his two sons currently serving.

And I thought such politicized logic was confined to American newsrooms. Yet Catherine refused to argue with her peers. She didn’t want to jeopardize her experiment.

“I couldn’t show people really what it was for. I really kind of wanted to laugh because they had no idea what I was doing,” she said.

Only a few times did anyone say anything remotely positive about her McCain shirt. One girl pulled her aside in a corner, out of earshot of other students, and whispered, “I really like your shirt.”

Whispered “out of earshot”…..

It’s time for conservatives to be more “activist” and to start fighting back more vocally and vociferously against the misperceptions and decades of slander against the Republican Party and conservative ideology. More importantly, we need to stem the tide of liberal indoctrination in our schools, when we turn on the tv, when we open up the newspaper, when we go out to see movies. If we don’t we will lose the culture war and we will lose the half of America that we believe represents the best part of America.

Hat tip: American Power for the story of Catherine Vogt. 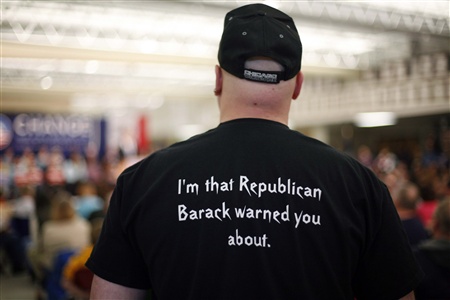