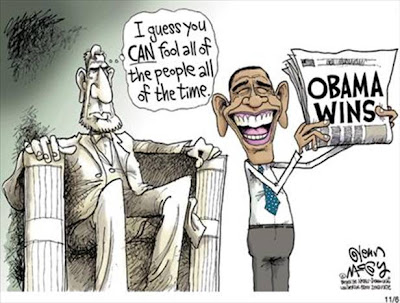 Welcome to the United Socialist State of America.

The voting public has spoken and chose the most unqualified person imaginable for President of the United States. Then again, the voters were ripe for the winds of change and would have voted for Pol Pot if he were the Dem’s presidential candidate.

We are now have front row seats to the spectacular failure that will define the Obama presidency. Of course, all abject failures of this regime..er..presidency will be blamed on Bush administration, the main stream media will concur, until they can’t hide the inadequacy of this new administration.

I’m disappointed that the nation will have to endure this quisling-in-chief for four long years. This could have been avoided, but maybe it IS a good thing. Obama may be revered by low information voters; but they are in for the mother of all buyer’s remorse when they realize that Obama will not direct rays from heaven to erase their mortgage payment and provide them with an O-nation gas card.

Today the Dow sank below 400 erasing gains, yesterday hamas rocketed Israel and a chill wind blew in an overcast, rainy day in Philly. A sign of things to come?
Steve Den Best makes some prediction, and I have tacked on to the list some of my own (7-10).

1. Obama’s “hold out your hand to everyone” foreign policy is going to be a catastrophe. They’ll love it in Europe. They’re probably laughing their heads off about it in the middle east already.

2. The US hasn’t suffered a terrorist attack by al Qaeda since 9/11, but we’ll get at least one during Obama’s term.

3. We’re going to lose in Afghanistan.

4. Iran will get nuclear weapons. There will be nuclear war between Iran and Israel.

5. There will eventually be a press backlash against Obama which will make their treatment of Bush look mild. Partly that’s going to be because Obama is going to disappoint them just as much as all his other supporters. Partly it will be the MSM desperately trying to regain its own credibility, by trying to show that they’re not in his tank any longer.

7. The nation of Georgia is toast, Ukraine and Poland should be very, very concerned. The US will boycott the Olympic Games in protest of the occupation of these nations

8. Myself, along with the posse over at Flopping Aces are looking forward to his coming failures and will point out at every opportunity how his future comments regarding foreign policy are identical to President Bush’s.

9. Obama is NOT the Anti-Christ. The Anti-Christ has an actual plan and millions of years of experience to call upon. Obama the President can claim NONE of these qualities.

10. Change is not such a bad thing. Today I crossed over into the light, changing my party registration to Republican.

Four years of an Obama administration should provide much entertainment, in two short years, midterm elections will begin to turn this nation back from the precipice. In the meantime, life will go on, peace movements will have members charged with assault, winter soldiers will continue to smear the reputation of their fellow soldiers, and a new stronger conservative base will rise.

The one number that gives me some solace is 57,000,000 voters did not buy the media’s hype or Obama’s phony change mantra.

If anyone is really interested in taking back this country start in the schools, just as the socialists did.

After reading many of the previous posts I think it’s time to remind folks that it is the duty of the loyal opposition to oppose those in power. It is time to play by the rules set down by the opposition over the past eight years and to give as good, or better, than we got.

Squishy Republicans should move to other side of the chamber where, I’m sure, they will feel more comfortable. The RNC should deny them money when they come up for re-election and the leadership should strip them of all committee posts.

Transsilvanya Phoenix
“Uhh…small problem with point #7
Poland is a NATO member. Russians will never risk a war with the entire North Atlantic Alliance, no matter how limp-wristed the US President may be.”

Should our president turn out to be “limp-wristed” he will simply be an additional one among the Western European NATO members. Not so with Russia’s leadership.

Make That 365:
…
That turned a 569-vote lead for McCain into a 1260-vote lead for Obama. Nebraska is one of only two states, along with Maine, that splits its electoral votes by congressional district.
…

@Jan: I just love how they always find more votes. It is a past time here.

Actually it is now a huge F’ning problem! The president of Russia has already made a provocative move and statements regarding the planned US missile defense system in Poland.

The Poles know far better than anyone on the planet what the worth of any protection agreement can be. Hitler signed a non-aggression treaty with Chamberlain and look what happened – the Germans decided to launch their European tour starting with Poland

Nato will let Poland be the new Sudetenland, and the Obama administration will schedule talks with no preconditions with the Russian president AFTER Poland is occupied.

Georgia, Poland and the Ukraine are screwed.

From Jan’s latest “cut and paste” (evidently, she can’t put a noun and verb together on her own…)

Make That 365:
…
That turned a 569-vote lead for McCain into a 1260-vote lead for Obama. Nebraska is one of only two states, along with Maine, that splits its electoral votes by congressional district.

You have to wonder about the perspective of so many that are current events challenged. The hated Bush got 50.73% of the vote in 2004, when he was so despised. Clinton blows Obama’s electoral votes away in 1996 with only 49% of the vote.

But Obama is some sort of progressive mandate? Give me a break! Or, in the new hep phrase… “get a grib”…. LOL

I’ll stay one of that 47.17% population, thank you. So what welfare programs can I get, being the new, “not the landslide” minority?

Show your Support of USSA or NOT?

Welcome to the New and Improved America

Login
wpDiscuz
59
0
Would love your thoughts, please comment.x
()
x
| Reply
‹ Back to Categories