….John McCain was shot down over Hanoi. 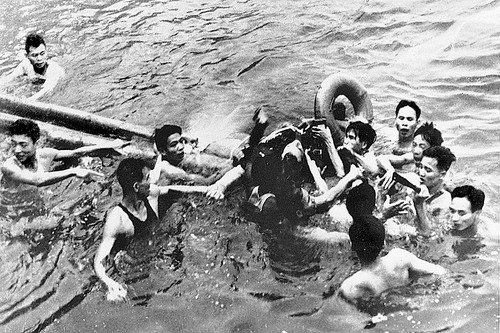 John McCain is pulled out of a Hanoi lake by a mix of North Vietnamese Army (NVA) and Vietnamese citizens in this October, 1967 file photo. McCain, currently a Republican presidential candidate, was shot down by a Surface-to-Air Missile (SAM) and had broken both arms and his right knee upon ejection, losing consciousness until he hit the water. (Photo courtesy of Senator McCain’s office/February 23, 2000)

Curt posted his POW interview, a few days ago.

The following is reprinted from a post I did during the 35th anniversary of his release; but I don’t think I posted it here at Flopping Aces, at the time (primary season, and I was already ruffling feathers with recent posts defending McCain, even though I don’t consider myself a fan of his; he was neither my first or second choice, or even third choice). 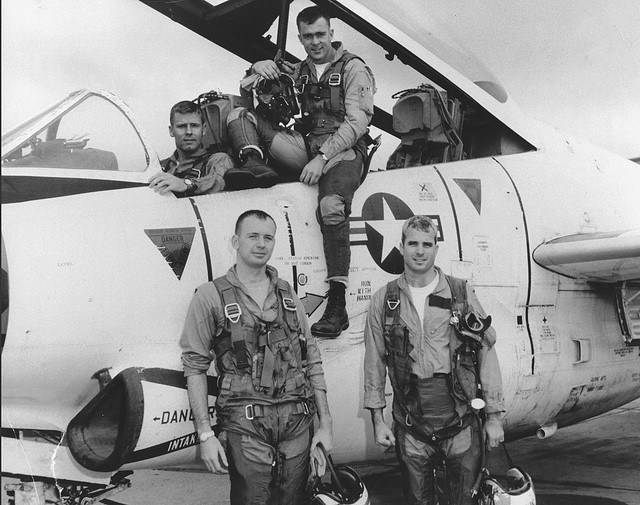 McCain has had a couple of life-threatening situations happen to him before his Skyhawk was shot down on his 23rd combat mission. One of these incidents (see Scott’s post) was the Forrestal fire incident:

By then a Lieutenant Commander, McCain was almost killed in action on July 29, 1967, while serving on Forrestal, operating in the Gulf of Tonkin. He was at the epicenter of the Forrestal fire, when a rocket accidentally fired across the carrier’s deck and hit planes, including McCain’s which had been waiting to launch. McCain escaped from his burning jet and was trying to help another pilot escape when a bomb exploded; McCain was struck in the legs and chest by shrapnel. The ensuing fire killed 134 sailors and took 24 hours to control.

March 15th is the day McCain finally came home, after spending 5 and a half years as a Vietnam POW. He underwent intensive physical therapy for his injuries. To this day, he can only lift his arms only so high, above his head.

McCain spent another 8 years of honorable service in the Navy: he became Commanding Officer of a large A-7 Corsair II Navy training squadron stationed in Florida. McCain’s leadership abilities were credited with turning around a mediocre unit and winning the squadron its first Meritorious Unit Commendation. During this period, the McCains’ marriage began to falter; he would later say he was to blame.

The following story appeared May 14, 1973 in U.S.News & World Report. It is John McCain’s own account of his years as a POW. Whatever you may think about his qualifications for president, his 25 years service as a U.S. Senator, I think every American should at least appreciate what he and others like him endured as POWs, in service to our country.

The date was Oct. 26, 1967. I was on my 23rd mission, flying right over the heart of Hanoi in a dive at about 4,500 feet, when a Russian missile the size of a telephone pole came up—the sky was full of them—and blew the right wing off my Skyhawk dive bomber. It went into an inverted, almost straight-down spin.

I pulled the ejection handle, and was knocked unconscious by the force of the ejection—the air speed was about 500 knots. I didn’t realize it at the moment, but I had broken my right leg around the knee, my right arm in three places, and my left arm. I regained consciousness just before I landed by parachute in a lake right in the corner of Hanoi, one they called the Western Lake. My helmet and my oxygen mask had been blown off.

I hit the water and sank to the bottom. I think the lake is about 15 feet deep, maybe 20. I kicked off the bottom. I did not feel any pain at the time, and was able to rise to the surface. I took a breath of air and started sinking again. Of course, I was wearing 50 pounds, at least, of equipment and gear. I went down and managed to kick up to the surface once more. I couldn’t understand why I couldn’t use my right leg or my arm. I was in a dazed condition. I went up to the top again and sank back down. This time I couldn’t get back to the surface. I was wearing an inflatable life-preserver-type thing that looked like water wings. I reached down with my mouth and got the toggle between my teeth and inflated the preserver and finally floated to the top.

Some North Vietnamese swam out and pulled me to the side of the lake and immediately started stripping me, which is their standard procedure. Of course, this being in the center of town, a huge crowd of people gathered, and they were all hollering and screaming and cursing and spitting and kicking at me.

When they had most of my clothes off, I felt a twinge in my right knee. I sat up and looked at it, and my right foot was resting next to my left knee, just in a 90-degree position. I said, “My God–my leg!” That seemed to enrage them —I don’t know why. One of them slammed a rifle butt down on my shoulder, and smashed it pretty badly. Another stuck a bayonet in my foot. The mob was really getting up-tight.