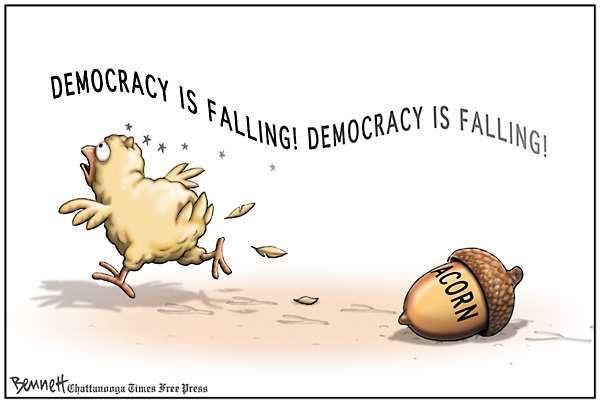 THE VERY “fabric of democracy,” or so Sen. John McCain warned at the final presidential debate, is at stake. “We need to know the full extent of Senator Obama’s relationship with ACORN, [which] is now on the verge of maybe perpetrating one of the greatest frauds in voter history in this country,” Mr. McCain said, referring to the liberal group the Association of Community Organizations for Reform Now. Mr. McCain’s hyperbole about ACORN, which has endorsed Mr. Obama, is unwarranted.

The group, whose voter registration drive has helped sign up about 450,000 low-income, minority and young voters this election, has been accused of submitting phony or duplicate registrations. ACORN itself has acknowledged problems, noting that in Nevada “there have been several times over the past ten months that our Las Vegas Quality Control program has identified a canvasser who appears to have knowingly submitted a fake or duplicate application in order to pad his or her hours.” ACORN says it phones those who sign voter registration cards to verify that the applications are valid and flags the questionable registrations for election officials. Most of what are presumed to be fraudulent registrations can be explained as clerical errors; voting officials routinely check registrations against databases, such as driver’s license records, to identify questionable submissions.

If ACORN or any other group has engaged in a scheme to submit phony registrations, by all means that should be thoroughly investigated and prosecuted. What Mr. McCain’s alarmist attack ignores, however, is the enormous gulf between improper voter registration — whether fraudulent or merely erroneous — and actually committing fraud at the ballot box. Evidence of fraudulent voting is scant, though there is always a risk. But there is a far greater risk of citizens entitled to vote being turned away from the polls — and the real threat to the “fabric of democracy” is the McCain campaign’s effort to stir up unfounded suspicions of massive voter fraud, casting unwarranted doubt on the legitimacy of the election.

It’s certainly not like there aren’t ties between Senator Obama and ACORN that the American voter should know about; or that ACORN hasn’t committed voter registration fraud and voter fraud in the past; nor that the tax-payer-funded “nonpartisan” organization isn’t merely encouraging new voters, but seeking out low-income potential voters, most likely to be welfare recipients and therefore wedded to the nanny-state party, with the intent of turning them into Democratic Party voters.

I suppose ACORN is just another one of those “distractions” from “the issues”.