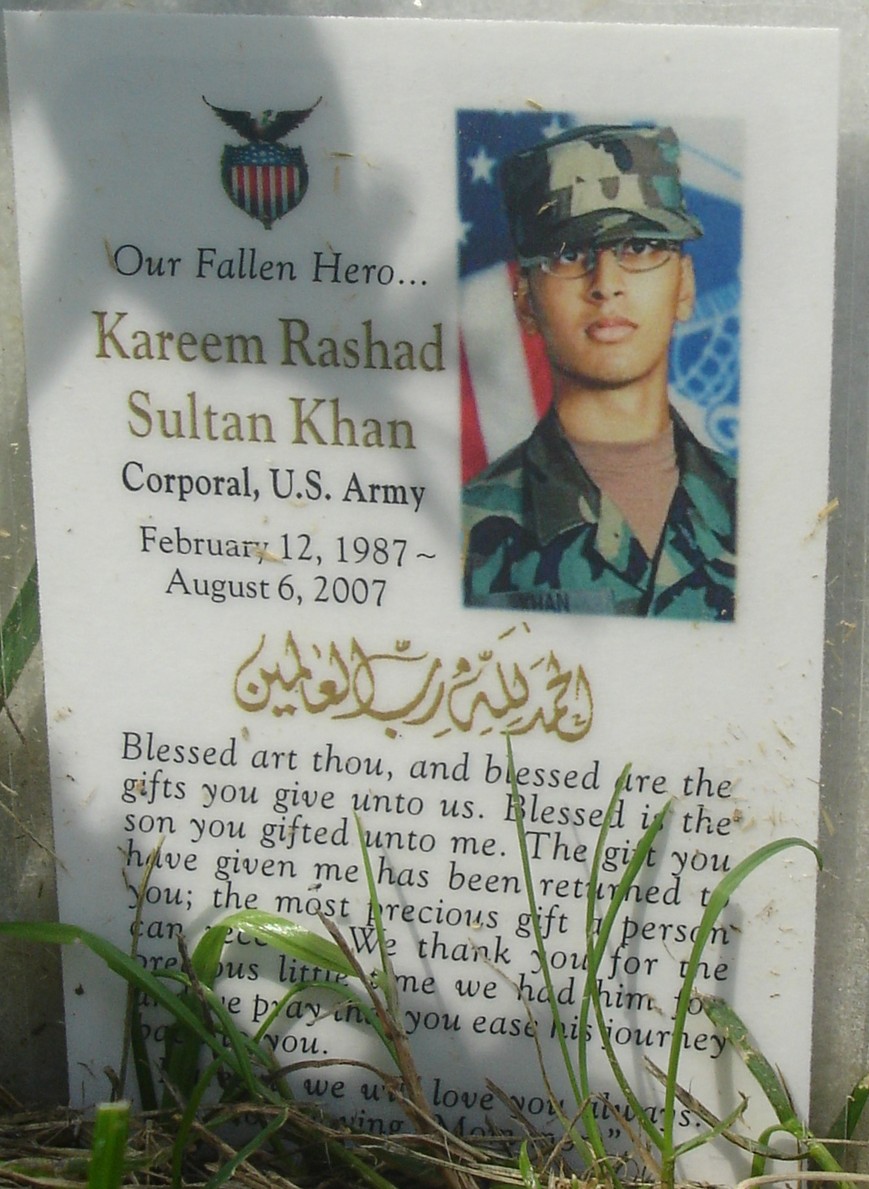 I’m also troubled by, not what Senator McCain says, but what members of the party say. And it is permitted to be said such things as, “Well, you know that Mr. Obama is a Muslim.”

Well, the correct answer is, he is not a Muslim; he’s a Christian. He’s always been a Christian.

But the really right answer is, what if he is? Is there something wrong with being a Muslim in this country? The answer’s no, that’s not America.

Is there something wrong with some seven-year-old Muslim-American kid believing that he or she could be president?

Yet, I have heard senior members of my own party drop the suggestion, “He’s a Muslim and he might be associated terrorists.” This is not the way we should be doing it in America.

I feel strongly about this particular point because of a picture I saw in a magazine. It was a photo essay about troops who are serving in Iraq and Afghanistan.

And one picture at the tail end of this photo essay was of a mother in Arlington Cemetery, and she had her head on the headstone of her son’s grave. And as the picture focused in, you could see the writing on the headstone. And it gave his awards — Purple Heart, Bronze Star — showed that he died in Iraq, gave his date of birth, date of death. He was 20 years old.

And then, at the very top of the headstone, it didn’t have a Christian cross; it didn’t have the Star of David; it had crescent and a star of the Islamic faith. And his name was Kareem Rashad Sultan Khan, and he was an American. He was born in New Jersey. He was 14 years old at the time of 9/11, and he waited until he can go serve his country, and he gave his life.

Now, we have got to stop polarizing ourself in this way. And John McCain is as nondiscriminatory as anyone I know. But I’m troubled about the fact that, within the party, we have these kinds of expressions.

Circumstances: He and three other soldiers died of wounds suffered from an improvised explosive device.

A 20-year-old Ocean County man has died in Iraq, officials said today.
Army Spc. Kareem R. Khan of Manahawkin was killed Aug. 6 in Baqubah, according to the Department of Defense. He and three other soldiers died of wounds suffered from an improvised explosive device, the department said today.

Khan was assigned to the 1st Battalion, 23rd Infantry Regiment, 3rd Brigade, 2nd Infantry Division (Stryker Brigade Combat Team), based in Fort Lewis, Wash. He is at least the 80th service member with ties to New Jersey to die in Iraq.

Khan had been awarded the Purple Heart for injuries from previous combat, according to the Associated Press.

The e-mails Army Spc. Kareem Khan sent from Iraq to his parents in Manahawkin never mentioned the dangers he faced.
Instead, the 20-year-old infantryman chose words and pictures to assure his parents that a young man who had never traveled outside New Jersey before enlisting would be okay. The images included shots of him playing soccer with Iraqi children and hugging an adoring young boy in Baghdad. Khan usually added words about his belief in the mission.
“He told us many times that whatever they were doing is working,” his father, Feroze Khan, said last night.
On Monday, two soldiers from the casualty notification team arrived at Khan’s parents split-level home to tell them he was dead, the 80th service member with ties to New Jersey killed in Iraq.
Khan and three other soldiers from the Stryker Brigade Combat Team of the 2nd Infantry Division out of Fort Lewis, Wash., were killed when a blast destroyed a house they were clearing in Baqouba, Brig. Gen. Mick Bednarek, operations chief of the offensive there, told KIRO Radio of Seattle.
Last night, members of Khan’s extended family, some of whom came from as far away as Trinidad, gathered at the Ocean County home, waiting for his body to be returned to New Jersey so they could make funeral arrangements.
“We were never prepared for this,” said his stepmother, Nisha Khan. “He was supposed to be coming home. It’s not supposed to be like this.”
Khan shipped off for basic training at Fort Benning, Ga., about a month after graduating from Southern Regional High School two years ago. He’d relished the trip to boot camp — it had been his first plane ride.
Khan had also talked about joining the Army for a long time.
“From a boy, that’s all he wanted to be. A soldier,” his stepmother said.
“The Army was his life,” his father added.
After several months of training, Khan was assigned to the Stryker Brigade. He was in the Pacific Northwest only for a few months before his unit shipped out for Iraq last July. The unit was originally scheduled to return to the U.S. last month, but the troop “surge” in Baghdad extended its combat tour until September.
If Khan was upset about the extension, he never shared it with his parents.
Instead, he sent the e-mails and the pictures that now fill his parents’ dining room.
In one, he’s holding a cherubic-faced boy to his hip.
Nisha Khan said her stepson told her the boy simply took to him during a week his unit spent in the Iraqi capital.
“No matter where they were going, the kid would follow him and walk and not leave him alone,” she said.
As U.S. troops stepped up combat operations around Baghdad over the past several months, Khan’s e-mails to his parents slowed from perhaps three a week to maybe one.
He wrote about missing the chance to watch the war movies he loved — “Saving Private Ryan,” “Letters from Iwo Jima.”
Khan also kept in touch with several of his high school classmates.
One, Diana Haggerty, said they traded e-mails on their Facebook accounts earlier this week and that Khan had talked about coming home soon.
“He was an amazing person for that fact that he put his life on the line for his country,” she said.
Last September, Khan came home on two weeks’ leave. It was the last time he saw his family.
He spent much of his leave playing with his 11-year-old sister, Aliya. He also went to her school and talked to her class.
Khan told his family he was unsure whether he wanted to make the Army his career or get out and go to college.
But in the near term, his plans were made.
He envisioned a family vacation to a place where he could snowboard. And he wanted to buy his sister a dog. Maybe a husky.
“We had plans,” his step-mother said. 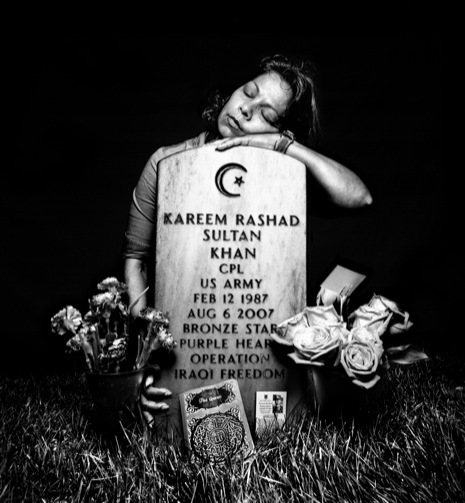 Elsheba Khan at the grave of her son, Specialist Kareem Rashad Sultan Khan
Photo by Platon, appearing in The New Yorker, referenced by Colin Powell on Meet the Press.

“All he wanted to be was a solider,” Feroze Khan said. “It’s something that just stuck with him, and we were behind him 100 percent.”
But Khan didn’t want to be just any kind of solider.

“He wouldn’t even discuss going into the Marines or the Navy, that never interested him,” said Khan’s stepmother, Nisha Khan. “It was his dream to be a solider in the Army.”

Feroze Khan said his son never had a negative experience in Iraq being a Muslim in the U.S. Army.

Iraqi children even gravitated toward the always-smiling Khan when they would see his name.

“Kareem called me and told me this kid wouldn’t stop following him around. But he didn’t mind,” said Feroze Khan, who proudly displays a picture in the family’s dining room of the Iraqi child hugging Khan.

Khan would regularly take gifts that were meant for him and share them with the Iraqi children.

But despite the name, Khan was as American as they come. His favorite football team, after all, was the Dallas Cowboys — “America’s Team.”

That is why, his family said, Khan didn’t complain when the Army extended his tour, which was supposed to end in June.

“The way he thought of it was that he was an American and he had a job to do,” Nisha Khan said.

Previous posts:
October Surprise: ” ‘Cause the One on the Right was on the Left”
“What Do You Do With a General When He Stops Being a General?” [Reader Post]