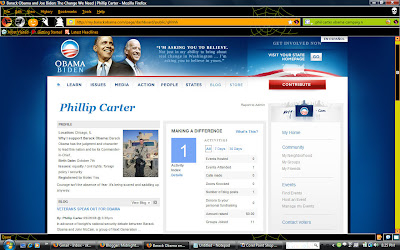 Who also happens to be one of the founding members of IAVA: 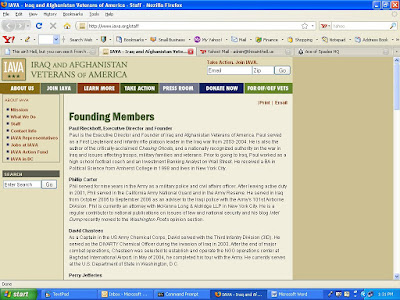 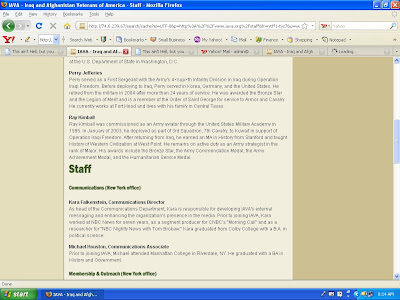 A few days ago, an email was sent out across the blogosphere from the Veteran’s Director of the Obama Campaign:

Given your coverage of issues facing veterans and the military, I thought this might interest you.

CHICAGO, IL – Today, the non-partisan Iraq and Afghanistan Veterans of America (IAVA) issued their 2008 Congressional report card, grading both Senators Barack Obama and Joe Biden a B. (http://www.veteranreportcard.org/) The same report card gave Senator John McCain a D, making him one of only four Senators to receive a D or below. The scorecard was based on key votes affecting Iraq and Afghanistan veterans – the GI Bill, VA benefits and mental health care – while also highlighting who failed to make veterans a priority.

An Obama supporter, complete with his own myobama page, speaking on the behalf of a ‘non partisan’ veteran’s organization? Is anyone surprised the ‘score card’ heavily favors Obama over Mccain? That is inexplicable! Or is it?

The story starts getting juicy when my dear buddy, TSO, discovered he was a member in good standing with  IAVA (Iraq and Afghanistan Veterans of America).  Upon a closer look at this organization and their scorecard, he declares the scorecard an ‘Epic Fail‘:

I noticed some real “luminaries” in the veteran’s movement with solid voting scores: Baghdad Jim McDermott got an A. Maxine Waters got an A. Dennis Kucinich got an A. Jim Marshall (the guy who is in the Ranger Hall of Fame, visited the troops more than 99% of other Members of Congress, and who has an open door policy for veterans) well, he got a B. Duncan Hunter got a C.

Who scored the lowest?  TSO breaks down the scoring and discovers Senator DeMint’s grade of “F” came about because of his balking at a paltry 4 BILLION earmark for a 90210 park written into the bill “Funding Veterans’ Health Care, 2008″.

Soon after TSO’s application of sunshine and disinfectant to this scorecard, he received the above email from the Obama campaign from his newest buddy, Phil Carter. (see above)

A “non-partisan” group does a scorecard made up of votes that aren’t what they say the votes are for, then the Obama Campaign uses them to alert people they got a B and McCain got a D. Only, the guy sending the email out from the Obama campaign is a founding member of the “Non-partisan” organization that did the damn scorecard in the first place?

A connection every single media outlet who carried this story failed to question.

The saga was picked up by Blackfive, with the executive director of IAVA, Paul Rieckhoff, responding to the criticism of the scorecard at Blackfive.

In his rebuttal, the executive director makes is the clarification of Phillip’s role in IAVA:

And as for Phil Carter, it is no secret that he is an IAVA member. We have tens of thousands of members—and Phil is one of them. And we have clarified Phil’s role at IAVA on this page just so there is no confusion.

The screen shot below shows the clarification of Phil’s role: 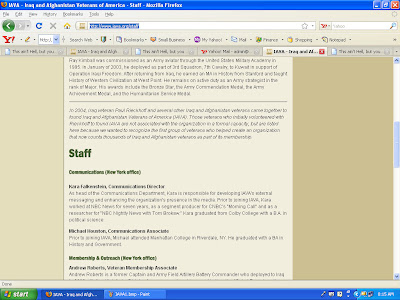 Note that the identical screen shot from the day before makes no such distinction (see image at the top of this post). Hmm, is this clarification or distancing by IAVA?

An aside to this discussion, but one I cannot ignore, is one statement by Paul Rieckhoff that contains the chill wind of domestic surveillance:

I hope you will post this, and let your readers hear from us in response to TSO’s recent post. Glad to see that he personally likes me. I only wish he put his real name on his posts so I knew who it was that was attacking my integrity and that of our organization.

TSO has posted a brief response to Paul at IAVA over at This Ain’t Hell. Check out the comments section of this post for more information regarding IAVA and Phillip Carter.

This story is still unfolding, and the level of collusion between Obama’s campaign and IAVA has yet to be fully uncovered. Stay tuned for more updates!

I knew you’d be atop this, grrrrl. LOL

It was only a matter of time! Had a great time last night hanging out with Tom Manion and Vets for Freedom.

McCain low marks are a reflection poor attendence rather than his actually votes. Not voting was scored the same as voting against.

The scoring was based on bills that provided benefits for veterens. You shouldn’t be surprised that Democrats are better at giving out money.

I think the only person who spins more than Fit Fit is someone swinging from the gallows on a breezy day.

Sheesh. IAVA is in bed with Obama and there is no outrage from the progressives.

That “spin” was more for McCain than against. Nice lynching reference.

What next? Obama faith director belongs to a church?

It’s amazing how TE Lawrence fails to even understand the important aspect here. The issue here is not that he belongs to a group, I belong to many. What is important here is that it is illegal for Campaigns and PACS to coordinate campaigns, unless it is a coordinated campaign and then you need to do other reporting requirements. That IAVA is non-partisan, coming from the director of Vets for Obama doesn’t srike you as aburd?

IAVA’s Todd Bowers will be my guest on News Talk Online on Paltalk.com to discuss what the Obama administration must do to help returning veterans at 5 PM New York time Thursday Nov. 13.

To talk to him please go to http://www.garybaumgarten.com and click on the JOIN THE SHOW link. There is no charge.