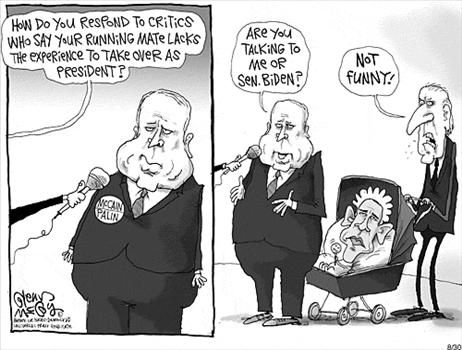 “I think she’s far more ready to be President if something happens to McCain than Barack Obama would be if something doesn’t happen to McCain.”-Mike Huckabee on Hannity & Colmes, August 29, 2008 (video here)

By way of Pondering Penguin:

in an article on YAHOO! News, four ‘Presidential scholars’ are asked about the choice of Governor Sarah Palin. Examples: “So unconventional was McCain’s choice that it left students of the presidency literally “stunned,” in the words of Joel Goldstein, a St. Louis University law professor and scholar of the vice presidency. “Being governor of a small state for less than two years is not consistent with the normal criteria for determining who’s of presidential caliber,” said Joel Goldstein. “I think she is the most inexperienced person on a major-party ticket in modern history,” said presidential historian Matthew Dallek.” “If she had been around for two terms as governor – or been a senator- it would have been an incredible choice,” said historian Doris Kearns Goodwin. “The first thing that hits me,” said Stephen Hess of the Brookings Institution, “is that it suggest that John McCain is a gambler. This is a high-roller decision.”

Thanks to reader Kevin Gregory form McClatchy Watch we find that Matthew Dallek is not an impartial voice:

The McCain campaign issued the following statement, “The authors quote four scholars attacking Gov. Palin’s fitness for the office of vice president. Among them, David Kennedy is a maxed-out Obama donor, Joel Goldstein is also an Obama donor, and Doris Kearns Goodwin has donated exclusively to Democrats this cycle. Finally, Matthew Dallek is a former speech writer for Dick Gephardt. This is not a story about scholars questioning Gov. Palin’s credentials so much as partisan Democrats who would find a reason to disqualify or discount any nominee put forward by Sen. McCain.”

The issue of “experience” (and more specifically, “the lack thereof”) has always stood on shaky ground as a political attack point; and now with Sarah Palin on the McCain ticket, it might be a talking point now off the tables. As Michael Medved lays it out,

Yes, this undermines McCain’s future use of the experience issue, but that’s almost certainly a good thing, too. The experience issue has never worked well in presidential elections: Gerald Ford tried it against a one-term Governor of Georgia (the worthless Jimmy Carter) and lost; Carter tried it against Reagan (no foreign policy experience as Governor of California!) and got wiped out; George H.W. Bush tried to make it stick against Bill Clinton and the result was the lowest percentage of the vote for a Republican candidate since Wiliam Howard Taft. The line McCain’s been using “He’s Not Ready to Lead” is still viable – and should emphasize a discussion of Obama’s policies, not his job history—his radicalism, not his resume. Meanwhile, we should invite comparisons of Governor Palin’s experience with Obama’s: won’t the PTA connect more with middle class voters than “community organizer,” and property tax-cutting small town mayor count more than slippery State Senator who voted “present” a disquieting proportion of the time. In any event, both tickets now balance experience with youthful energy – but McCain is balancing it the right way, with the experience at the top.

If Obama supporters now see an opening for attack in regard to Sarah Palin‘s “lack” of experience, they will only succeed in bringing back to scrutiny Obama’s own leadership (in)experience. Let’s see that “Tale of the Tape” chart that Curt linked to by Jeff Emanuel, once again:

Senator Obama’s spokesman noted upon hearing about Senator John McCain’s selection of Governor Palin: “Today, John McCain put the former mayor of a town of 9,000 with zero foreign policy experience a heartbeat away from the presidency.”

Do Democrats really want to go there? Which previous experience serves a president better: Legislative or executive?

No matter, Jay Tea writes why it’s the “mileage and not the years” that is important:

But what matters to me is not quantity of time, but quality. What Palin has achieved in her political career dwarfs Obama’s accomplishments, as well as those of a lot of other politicians with a lot more time in office.

Just click on the links provided in this post if you are unfamiliar with Sarah Palin’s list of accomplishments during time served in public office. Then go visit Wolf Howling (hat tip: Bookworm) for an Obama-Palin comparison that’ll leave you howling in stitches.