I’m not buying it: 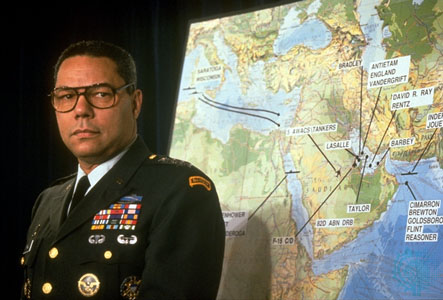 Retired Gen. Colin Powell is among the potential running mates who have been considered by John McCain, campaign advisers told Politico.

Powell was among the possible vice presidential choices the Arizona Republican senator was thinking of when he said he would not rule out a supporter of abortion rights, a key adviser said.

Campaign officials say McCain has told them not to discuss the process.

Powell, who was President Bush’s first secretary of state, would add celebrity to the ticket, as well as reinforce McCain’s strength as a potential commander in chief, which his campaign considers to be one of his chief assets.

Oh, it definitely would be a coup to get him on the ticket but the man could of won the nomination for President if he desired, why take a back seat job?

He would bring even more military prestige to the ticket, and his stance against the Bush administration would be a winner among those Hillaryites who can’t stand Obama, as well as his pro-choice beliefs. That last one would be a real downer for conservatives tho. But if it guaranteed that Obama would never sit in that chair in the oval office, would it be worth it?

I for one would say yes.

But I still don’t believe he is even considering the job.

Another certified RINO, this time at the bottom of the ticket. How wonderful! That way, if McCain should die in office, we would be guaranteed another pro illegal alien invasion, pro global warming hoax president! I feel much better now!

He would certainly kill the McSame jokes the libs like to throw around. And I figure the man who isn’t looking for the job usually does a better job ethically.

Like you I thought he didn’t want a public servant job, but he stands head and shoulders over all the other potential VP’s. It would toss race out the window right on its head as well.

Talk about contrast. If Powell had the presidential nomination; Powell vs Obama would have been Mohammed Ali versus the pip-squeek with ears.

I just don’t understood why, the one man I thought would make an outstanding first black president just doesn’t want to do it.

I thought I heard somewhere that he was endorsing Obama. Possibly at the Dem Convention?

He’s military all right but a pacifist military if you can believe such a thing exists. I will never forgive him for his undermining Bush in the opening of the Iraq war. I think he deliberately influenced the Turks not to let us use the passage through Turkey or at best did not try hard enough because he was against the war from the start just as he was against furthering the Gulf War. If he had wanted to be president and make policies he should have run himself. We woiuld not have had Clinton at all then and the Clintons could have sunk in the annals of history. I also think he knew about Richard Armitage’s “outing” of Valerie Plame and kept quiet to the detriment of the Republican party. If he is named vice president I will still vote for McCain because Obama is so awful but with more reluctance than before and with a heavier heart.

With the power of the media to distort reality, I honestly don’t know where Powell really stands. Until he comes out and unreservedly supports McCain’s policies (and who knows, he may have done so and the MSM is hiding it from us) I would not trust him.

I doubt this, Powell himself said he was retiring from politics a while back. Going to stick to his foundation.

The big coup for McCain would be to put Palin on the ticket. First women VP. She’s a real hottee, which would drive Peloser up the walls and likely cause her face to implode.

I think that Powell would never get back into politics, and with his dissing Bush and many conservatives, McCain would have no chance at winning. Many conservatives would not vote or vote for an alternative.

Powell is a no win in Iraq general. He is a liberal by any standard. He is very much pro-abortion.
He would not get a hand full of black votes because he is an uncle Tom to most blacks. He certainly does not inspire most conservatives. Where is his benefit to McCain?

Powell seems to be popular with Hollywood celebs…that confirms what I’ve felt about him for several years. Not a good pick for McCain, in my opinion. I don’t think it will happen.

as for Palin, she has some troubles at home, so i doubt shes on the short list anymore

Tim Pawlenty looks to be the choice, he is from a battle ground state and adding him to the ticket might swing that state into the McCain column

If McCain picks Powell, he will become the next president. DO his advisers have enough insight and awareness to realize this reality and to choose Powell as a running mate? We will see. LETS HOPE SO!!!!!!!!!!!!!