A man who authorities said was keeping weapons and military-style gear in his hotel room and car appeared in court Thursday on charges he threatened to assassinate Democratic presidential candidate Barack Obama.

Raymond Hunter Geisel, 22, was arrested by the Secret Service on Saturday in Miami and was ordered held at Miami’s downtown detention center without bail Thursday by a federal magistrate.

A Secret Service affidavit charges that Geisel made the threat during a training class for bail bondsmen in Miami in late July. According to someone else in the 48-member class, Geisel allegedly referred to Obama with a racial epithet and continued, “If he gets elected, I’ll assassinate him myself.”

Obama was most recently in Florida on Aug. 1-2 but did not visit the South Florida area.

Another person in the class quoted Geisel as saying that “he hated George W. Bush and that he wanted to put a bullet in the president’s head,” according to the Secret Service. 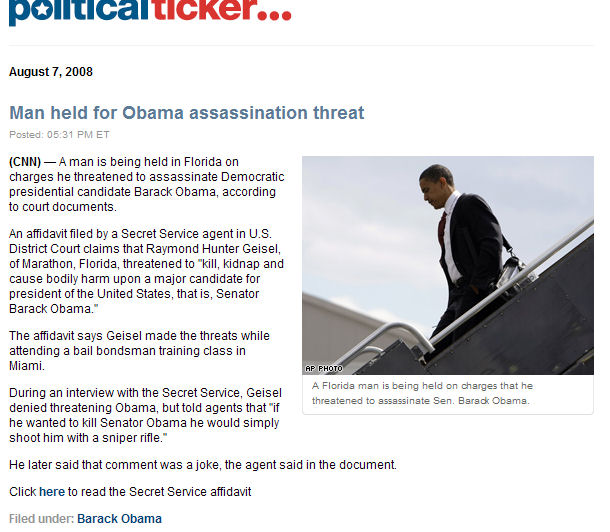 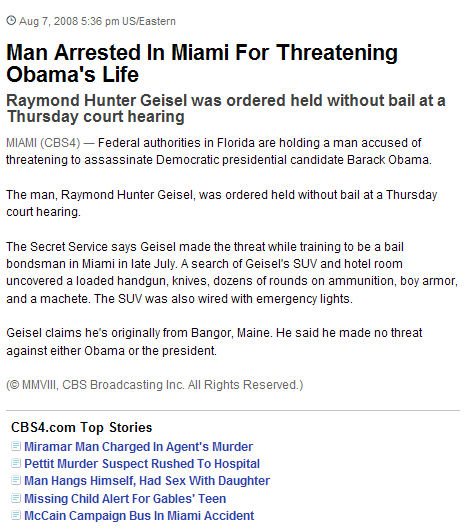 As I guessed, CNN finally added the Bush threat but only after some two hours of hate spewed in the comment section directed at the evil white man. Bob Owens has the details:

Sometime later—perhaps the 8:19PM update now showing—CNN finally posted the entire story, including the threats made by the suspect against President Bush.

After 3-4 hours of letting half-truths percolate to establish the narrative, CNN then they filled in the rest of the story, after the damage was done.