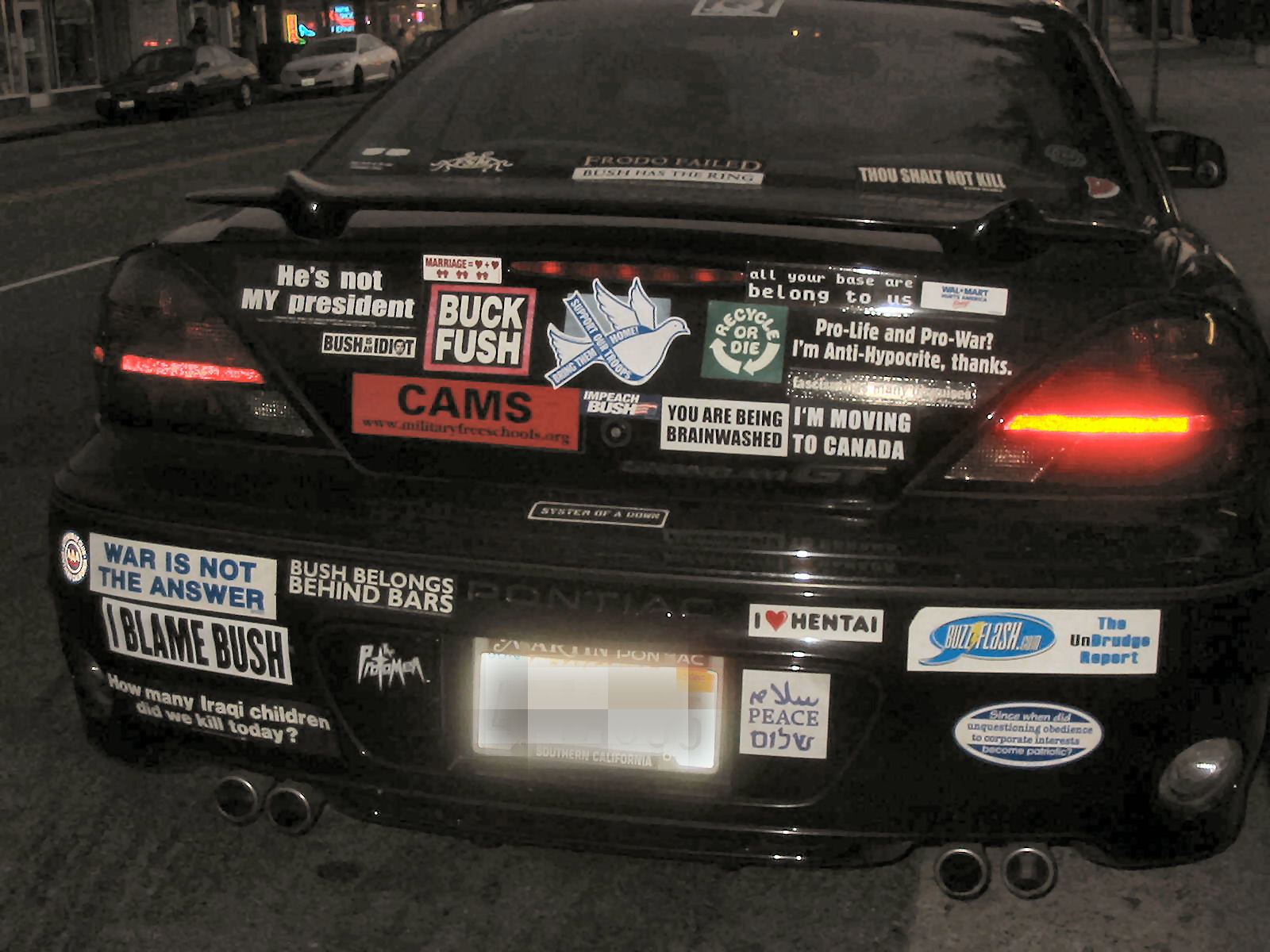 Living in Southern California, despite pockets of conservative communities here and there, we bleed primarily blue. Or so it at least seems, on the surface.

It’s said by some that America leans conservative. You’d never really know that by following pop culture, including much of the mainstream news, TV programming, and Hollywood.

Liberal activists have always appeared to make the loudest noise, wearing their liberalism on their sleeves, in open hostility to all things conservative (last week, one hippie mobile on the road had a bumpersticker that said “I’m pro-choice and I vote”, “Sticking it to the religious right” and a host of other “in your face” type of thumb-in-the-eye stickers plastered to the vehicle like a moving billboard sign). I know I generalize, and it could only be because I live in blue state California; but I think liberals have always been much more vocal and liberated in their views, not shy to make spectacles of themselves in demonstrations. Counter-protestors, such as the Chester County Victory Movement, are the much welcomed exception to the rule.

I have yet to see anyone in Los Angeles sport anti-liberal bumperstickers and t-shirts, though on rare occasions there might be a Bush/Cheney sticker (I’ve only seen one McCain bumpersticker, though I’m sure that will change as the “normal people” who aren’t political 24-7 might show their support for a month or two prior to election); and a little bit more common are pro-troop and military stickers, since those are not statements of political affiliation (although I’ve yet to see a “semper fi” and “Army Strong” sticker alongside “Code Pink” and “I Support the Troops- Bring Them Home” bumperstickers platered onto the same moonbatmobile).

I bring this up, because Bookworm has made the following post (excerpt):

As regular readers know, I’ve chosen to keep my political life separate from the day-to-day aspects of my life. I simply can’t (and don’t want to) run the risk of tainting my carpools, my neighborhood barbecues, my kids’ comfort level at school, the camaraderie of the sports teams with which we’re involved, etc., by exposing myself to the obloquy that is routinely heaped on conservatives here — and this is a hostility that increases as elections draw near, of course.

This has been my experience as well. People are shocked with an initial reaction of “disappointment” when they find out I’m a pro-Bush, pro-war on terror conservative Republican…and I vote. Eventually, they seem to get over it (but know better than to discuss politics with me).

The day after the 2004 Election results was a good day to be a Republican voter. I smile to this day whenever I see Kerry/Edwards bumperstickers.

I know I should be speaking out when I hear statements such as these, but the sad fact is that I like these people. Barring their monomaniacal animosity towards Bush and the Republicans, they’re otherwise very nice: they’re hard workers, loving parents, good neighbors and helpful and reliable friends. Being the social creature that I am, I don’t want with one word (”Republican”) to turn these friendships upside down and inside out. (I’m not the only one with this problem.) I don’t want to be on the receiving end of some hideous Jekyll to Hyde transformation, so I just keep my mouth shut.

Those people I know who have spoken aloud their new conservative political views have been horrified by the animosity turned against them by formerly friendly neighbors and colleagues. My in-laws who are, like me, 9/11 neocons (down in Los Angeles) have stared open-mouthed at colleagues who use staff meetings to revile Bush and the Republicans — all to the cheers and huzzahs of the other staff members. (Indeed, what they describe sounds remarkably like Orwell’s Two Minutes Hate.) On the occasions when they’ve suggested that maybe, just maybe, Bush isn’t the Antichrist, they’ve found themselves shunned by these same colleagues.

Bookworm goes on to discuss how she attended her first meeting with local Marin County Republicans:

One after another, people stated their names and their City. Everything stopped, though, when a young woman, maybe 25, spoke her name very softly and added that “I’m a secret Republican.” With that single statement, the stories started.

One of the attendees, who had been asked to make phone calls on behalf of McCain, said that he spoke to one lady who said, “Don’t call me again. I’m going to vote Republican, but I can’t let anybody know. It’s got to stay a secret.” Another person recalled a party he attended a few months ago. When he mentioned, discretely, that he was a Republican, a young lady sidled up to him and whispered, “I’m conservative too, but don’t let anyone know. I also have two friends here. I’ll point them out to you. They’re also secret conservatives.” Incidentally, I was unable to interview either of the people who told these anecdotes because both were afraid that any more details might give away their identities and harm them professionally. (Clearly, in their lines of work, they need two resumes, one for public consumption and one that is their secret one.)

I have a proposal for all of you reading this who live in hostile Blue territory and feel isolated in your conservative political views. The next time you’re at a party, or chit chatting in a park, or standing in line at a store, if the person to whom you’re talking seems like an intelligent, common-sensical type, throw in a reference to Adam Smith. If your conversational partner jumps on that reference, opining that Smith was a great economic philosopher, you’ve just discovered that you’re not alone.

Even if you chose, however, to keep your political affiliations secret — whether because you’re afraid for your job, worried about your friendships, or are just deeply private — please hie yourself to the polls on November 4, 2008, and cast your vote for John McCain. I have a strong suspicion that there’ll be an awful lot of unexpected votes for McCain,

I suspect that as November looms ever closer, more and more voters will find themselves rejecting the socialist liberalism of Obama’s policies, and shill for McCain. This includes cross-over voters.

As for remaining in the closet, I suggest to every conservative out there living in a blue state to not be afraid to come out into the light. You don’t have to be “rah rah Republican” and clown yourself up like the rightwing answer to Code Pink; but don’t be afraid to express your dissent from accepted, popular assumptions: “Bush lied”, “Bush is a moron”, “FOX News is yellow journalism”, etc. I’ve challenged people, friends and acquaintances, and you’d be surprised at how productive such conversations and confrontations can be. You just have to know how to set the tone and know the temperament of the person you are breaking lances with.

If you care about the future of this country, if you don’t want to see it make a sharp left turn in November, then it is in the best interest of every closet conservative out there to become an active participant in recruiting anti-Obama voters by doing what might not come easily: Talking politics. If you find the right stride, friendships to liberals will survive intact. Most of my friends lean left, and some are having doubts about Obama. And I know for certain, that some of their doubts have been influenced by my talking about politics.