It may be political theater, but it’s theater I can believe in 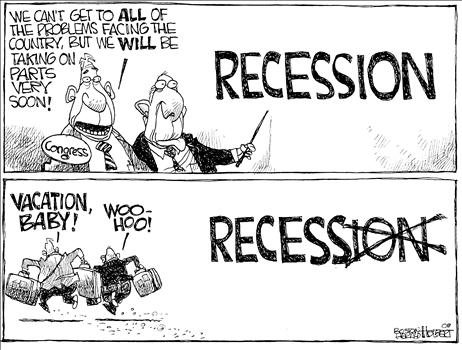 This is how the GOP gains back seats in Congress:

House Dems turn out the lights but GOP keeps talking

Speaker Nancy Pelosi (D-Calif.) and the Democrats adjourned the House and turned off the lights and killed the microphones, but Republicans are still on the floor talking gas prices.

Minority Leader John Boehner (R-Ohio) and other GOP leaders opposed the motion to adjourn the House, arguing that Pelosi’s refusal to schedule a vote allowing offshore drilling is hurting the American economy. They have refused to leave the floor after the adjournment motion passed at 11:23 a.m. and are busy bashing Pelosi and her fellow Democrats for leaving town for the August recess.

But C-SPAN, which has no control over the cameras in the chamber, has stopped broadcasting the House floor, meaning no one is witnessing this except the assembled Republicans, their aides, and one Democrat, Rep. Dennis Kucinich (D-Ohio), who has now left.

Only about a half-dozen Republicans were on the floor when this began, but the crowd has grown to about 20 now, according to Patrick O’Connor.

“This is the people’s House,” Rep, Thaddeus McCotter (R-Mich.) said. “This is not Pelosi’s politiburo.”

Democratic aides were furious at the GOP stunt, and reporters were kicked out of the Speaker’s Lobby, the space next to the House floor where they normally interview lawmakers.

“You’re not covering this, are you?” complaing one senior Democratic aide. Another called the Republicans “morons” for staying on the floor.

Charles Krauthammer in WaPo: Pelosi: Save the Planet, Let Someone Else Drill

Only in “Pelosi’s politiburo” would Democrats dare to dictate to the press what they can and cannot cover.

For all the catterwalling about threatened civil liberties under Bush, why no outcry over this clear violation of the 1st Amendment?

[…] writing: Bookworm: If a Tree falls in the forest… Sweetness and Light Flopping Aces Flopping Aces » Blog Archive pinged back with It may be political theater, but it’s […]

So Peeeloshi wasn’t playing kissy face smacky mouth all the time she was in Syria, she was taking ‘dictator’ lessons, and here I thought she was over there sucking one for the cause. Is there a difference in a democrat and a hard core communist? Not in the U.S. congress there isn’t. What a stupid POS from SF.

Meanwhile we can spend half our income on gas and pray for a warm winter. For once Algorbage better be right or thousands will freeze to death. No way the average worker can afford gas, food, and heating bills this winter. Maybe Hussein O will promise Chavez the VP slot for some cheap oil. Peeloshi, Chavez, Kim, the mouth or Iran and Hussein O, are like peas in a pod with no interest in the lives of the citizen, just personal power. I put $90 worth of gas in my truck this week and I don’t have to go to work daily since I’m retired, but I did skip a fire call (volunteer firefighter) for a residential alarm this morning because it cost me $5 to make a trip to the fire hall and back home (only 3 firefighters showed up). I’ll wait until they say fire or smoke showing before I respond. Look for a lot more lives and homes to be lost. And the democrats closed the doors in congress, went on vacation and left you hanging. Vote third party, vote for a dog, but do not vote for a communist, aka democrat.

0
Reply
Bookworm Room » If a tree falls in a forest, and no one is there, does it make a sound? *UPDATED*

[…] Flopping Aces is blogging too (and has a great cartoon). Share With Others: […]

ANY OF THE FOOLS WHO VOTED FOR THESE CLOWNS EMBARRASSED YET?

[…] And for the print version of the “power outage” story, see Wordsmith’s Political theater I can believe in. […]

When did the Democrapic party ever believe in free speech? The worst part of telling the MSM they couldn’t cover the Republicans was that they OBEYED, even Cspan put their tail between their legs and OBEYED.

COULD BE BIGGEST MISTAKE DEMS HAVE MADE YET
http://constitutionallyright.com/2008/08/01/gop-calls-for-president-to-convene-congress/

The Lefties are pretty cock sure of themselves, and that is an excellent recipe for disaster, hopefully for them – and SOON! If the Reps keep the pressure on, and if GW isn’t too dhimmified, then this has potential to be big. Lets hope so!

I’ve written to MY representatives. How about you?