Some Images from the Global Citizen’s One World Tour 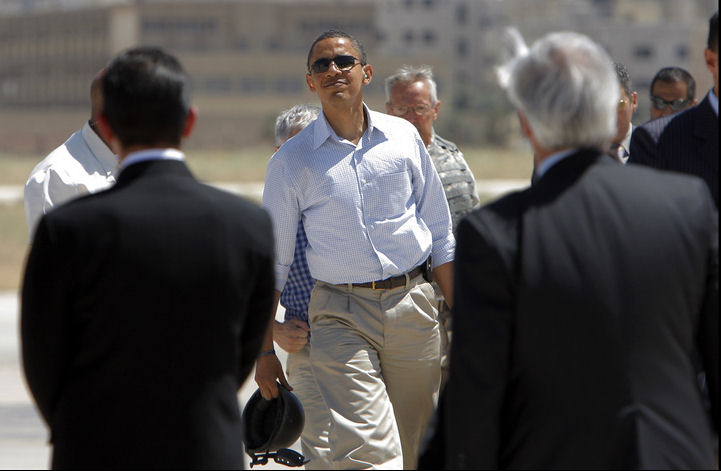 Estimated to have drawn a crowd of 200,000 (oops! My participle’s dangling), only that son of a beach, David Hasselhoff might have drawn a larger crowd during his Germany Concert Tour last year. Rock on! 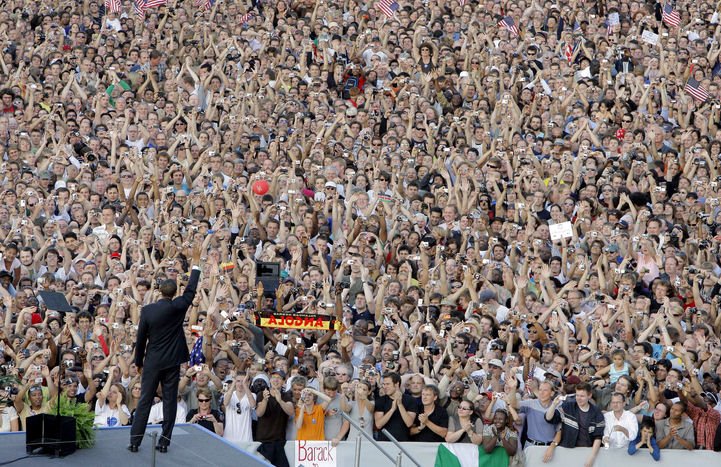 Apparently, sixty-two percent of Germans want Citizen Barack to be the next U.S. president, this according to a Gallup poll released the other day (even as Germans might have seen that the speech was all hype, airbrushed with the semblance of substance). Just who does he think he is? I mean…c’mon, the black kennedy didn’t even address the Berliners in German!

About that Sermon to the Germans:

I wonder if Americans will appreciate Obama’s deprecation of the United States on foreign soil for his own self-aggrandizing purposes.

As Dean Barnett pointed out on the Hugh Hewitt Show Friday, when Citizen Barack started, “Ours is a partnership that truly began sixty years ago this summer, on the day when the first American plane touched down at Templehof.”, it’s a bit off-history, as it was America- not “we”- that did the heavy lifting, and Germany benefited. Barnett:

Now on the one hand, you know you’re going to go to Germany and say nice things about the Germans- that’s a given, you’re going to be diplomatic; there’s no question about that. But…there is this other issue that everything in his worldview is funneled down into teammwork; that everyone of his speeches has the same narrative arc. David Brooks pointed this out in today’s New York Times, that there’s a problem, people come together, people solve the problem, and everybody lives happily ever after.

So, in South Africa there’s a problem, people come together, they defeat Apartheid, everybody lives happily ever after. But it doesn’t work like that in the real world. The problem in Germany in 1948 with the Soviet Union trying to take over all of Germany and trying to suffocate the western half of Germany wasn’t overcome by people coming together; it was overcome by President Harry Truman’s resolve; it was overcome by Harry Truman risking war to overcome it. And to refer to it as something as nebulous as a partnership is an inaccurate way to think of it. And we face the same sort of dynamics as we go forward into this election season that concerns the war on terror. That whether or not the world comes together, America has to win in Iraq, it has to win in Afghanistan.

Germany is one of our Coalition partners in Afghanistan and again, I don’t mean to rag on the Germans, obviously Barack Obama shouldn’t have gone there to rag on the Germans; but our Coalition partners- the Germans- in Afghanistan, they aren’t allowed to engage the enemy. So that’s something worth noting. That the progress we are going to achieve in Afghanistan in all likelihood is not going to be because of “the world comes together”. It’s not going to be because free countries come together. It’s going to be because America leads the way. It’s been that way for almost a century. A lot of us are very proud of America, a lot of us believe in America, and the thing that is really noteworthy of Obama’s speech is how it veered away from those things; how it didn’t acknowledge American exceptionalism. It talks about the Berlin Airlift like it was a partnership, which is a ludicrous way to think of it.

Barnett went on to analogize how Germany and the world benefited from the Cold War policies that Reagan enacted and which were opposed at the time. Hundreds of thousands protested his “tear down this wall” speech.

Also, blogger Z has a good friend, Klaus Lewin, who experienced the Berlin Airlift firsthand, as a little boy. Read about his memory and impressions. Here’s an excerpt:

Suddenly, unexpected relief came and it came from people who Adolph Hitler had declared our enemies: The Americans and the British. In an ingenious and forward-looking humane decision, the United States administration began to bring West Berlin much needed supplies through the air! The Brits went along with this action and the French, too, agreed to it but their military engagement in Indochina kept them from very actively participating.

On June 26, 1948, the first aircraft took off from Frankfurt and brought supply goods to Berlin. We Berliners could only be amazed and felt such deep thankfulness not only for the necessary help but also for the sign of a democratic new start for us and a return to feeling like one of a family of countries, something the Americans showed us through this wonderful action.

Also, we as children sensed the city starting to breathe again. We followed with gratefulness each announcement of the astonishing performances which our former “enemies” did for us. This was the birth hour of the German/American friendship and partnership which, despite all prophecies of gloom which always come from the same political side of both our countries, has achieved an unbreakable status.

Ok, admittedly, Klaus Lewin used the word “partnership” there; but the point was in highlighting American exceptionalism and the gratitude he feels to this day regarding America. He ends his letter to Z this way:

I had fourteen years to go before I could go to America for the first time. I stood on the Empire State Building, looked down at the city, and wanted to embrace every American. Thank you for your spirit and for being such an incredible role model of aid and friendship. 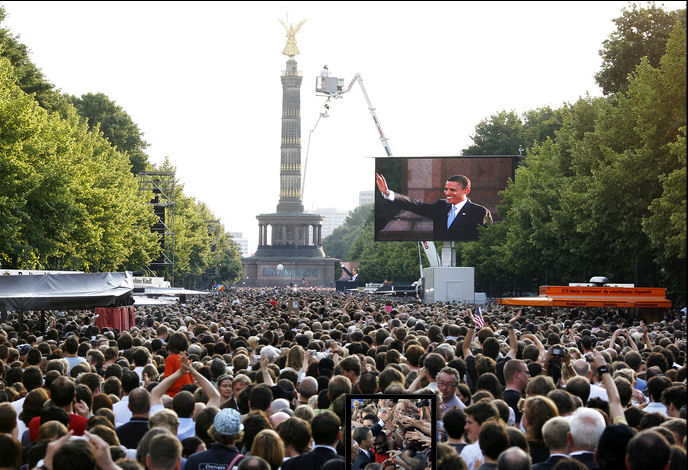 Obama appeared on large TV screens in front of the massive audience. He warned America could not quell violence in Afghanistan alone, and called on Europe for more troops and funding to defeat the Taliban and Al-Qaeda. Sebastian Willnow-AFP/Getty Images

“American presidential elections are not ‘home affairs’. American decisions have repercussions all over the globe…. Hence, the world should be given the right to vote.”

Wait a minute, people always get together at the end of a conflict…….the winners and the losers. Before the get together, many die to be on the winning team. What Obama left out is the part that got to the get together in the first place, as if it happened by magic.