Polls Show No Bounce For Obama Post-Maliki Comments On Withdrawal

McCain is gaining in key states:

Republican John McCain has quickly closed the gap between himself and Democratic rival Sen. Barack Obama in several key battleground states even as the Arizona senator struggles to break through the wall-to-wall coverage of Obama’s trip to Europe and the Middle East this week.

McCain and Obama are in a statistical dead heat in Colorado, Michigan and Minnesota while the Illinois senator has a more comfortable double-digit edge in Wisconsin, according to polling conducted by Quinnipiac University for washingtonpost.com and the Wall Street Journal during the past week. Only in Colorado, however, does McCain hold a greater percentage of the vote share than Obama.

Meanwhile Allah points to this Fox poll, with the same oversampling of Democrats as the last one, which show Obama gaining NO bounce from the Maliki comments supporting his plan for withdrawal:

Conducted Tuesday and Wednesday, three days after Maliki’s Spiegel interview dropped, with the same percentage of Democrats sampled as in their last poll (42%) and actually fewer Republicans this time than last (33% versus 35%). Head to head: Obama 41, McCain 40. On handling Iraq: McCain 47, Obama 39, a two-point gain since June. Maybe Obama’s position on the surge is starting to penetrate? There’s circumstantial evidence in the crosstabs. A quarter of independents and 15% of Democrats perceive “major improvements” in Iraq from the surge; many more see “minor improvements.” The fact that Obama’s popular with Europeans likewise is a wash. Democrats see it as positive, Republicans negative, and indies are split 26/25 — although people calling themselves “independents” these days are apt to include more disaffected Republicans so weigh that accordingly.

This question is classic tho: 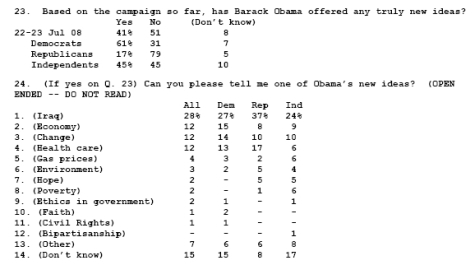 What kind of change does he stand for? Coming in second is the answer, “don’t know”.

Check out the rest of Allah’s post to see how even the majority of Democrats believe the media is in the tank for Obama. Then, check out the latest Rasmussen poll that shows 63% believe this European political rally trip doesn’t make him appear any more Presidential.

Obama’s arrogance and constant changing of position in a vain attempt to always appear right, coupled with the obvious media lovefest for the man, may be starting the hurt the guy. It does appear that many people are falling out of puppy love for him.

The Wall Street Journal Poll also had these interesting graphics:

Voters feel McCain is more experienced and knowledgeable and would be a better Commander in Chief who has stronger leadership skills, is more honest and stands up for what he believes in.

And of course the clincher: McCain has the background and values voters can identify with.

Despite the overwhelming cheering section Obama has in the “news” media the public isn’t buying it.

Obama – “This stuff isn’t working. Are you sure it’s FLUBBER”

Dang Mikes America,,,,
Does that second graphic look like the differences between libs and well,,,, the rest of us with a brain????

Things that really matter go to McCain vs. BS that makes you “feel” better to the messiah…
Wow,,, I may have to look at polls more often….

Mccain is going to have a serious time getting elected with the economy the way it is. Weather you are for or against the war there is no arguing that it is an expenditure we CAN NOT afford. I support our troops just as much as any other. But I am an anti-war conservative. Our troops would be better off protecting our borders from illegal immigrants then they are by increasing turmoil in the middle east sending oil prices skyrocketing. The republican party has faultered from it’s non-interventionlists roots. They would be wise to take note of this. Feel free to visit my blog.