Some Iraqi War News Not Reported

Ed Morrissey describes the remnants of Sadr’s army like so:

The remnants of the Mahdi Army have gone underground, forming an armed network on a much smaller scale. How small? Think of the Spartans at Thermopylae, and cut that in half while removing the courage and the military skill.

Couldn’t have put it better myself. He is talking about the report that Sadr’s army has been completely decimated and now number oh, about 150:

The military wing of the Sadrist Movement, the political party loyal to Shiite cleric Moqtada Sadr, is “turning itself into a secret armed organization,” an Iraqi intelligence official told the Gulf News on condition of anonymity.

Iraqi intelligence reports suggest the group’s numbers have dwindled from around 50,000 to as few as 150 in the past few years.

Intelligence officials credit decisions by Iraqi Prime Minister Nouri al-Maliki to launch military offensives against Shiite militants in the southern parts of the country as deterring the group. An Iraqi intelligence official reports as many as 2,000 Mehdi Army fighters were killed in recent operations in Basra, Sadr City and the provincial capital of Maysan, Amarah.

Meanwhile Bill Roggio reports that a released Gitmo detainee is back to the front and is responsible for attacks inside Iraq:

Al Qaeda in Iraq, through its puppet organization the Islamic State of Iraq, released its latest propaganda video on June 23. The video contains a montage of attacks throughout Iraq, and features two Kuwaiti al Qaeda operatives who conducted strikes in Mosul. One of the operatives was released from the US military prison in Guantanamo Bay, Cuba. The Islamic State of Iraq used footage taken at Combat Outpost Inman by this reporter in Mosul in March of this year.

The detainee, Abdullah Salih al Ajmi, drove a armored truck packed with explosives into a Iraqi army base and detonated it, killing 13 Iraqi army soldiers and wounding 42.

Just the tip of the iceberg I’m afraid after our courts release a large chunk of these guys.

The MSM is leading their Iraq reporting with the bombings in Anbar province while virtually ignoring the fact that the region is going to be handed over to Iraqi control on Saturday:

Once the most violent place in Iraq, Anbar province will come under Provincial Iraqi Control on Saturday, a senior military official said Monday.

“When you PIC a province, the coalition force goes into what we call an operational overwatch: They’re there, essentially as a security blanket,” the official said.

Christian at Defense Tech (who served in the Anbar province) wrote that the MSM reported on the handover on the web, but completely ignored it in their paper editions:

Though the Washington Post ran a story on its Web site today which lead with the heinous attempt by AQI to disrupt the handover by bombing a provincial council meeting and killing an estimated 20 (which hits pretty close to home for me because I met some of these tribal leaders in the very place where the bombing occurred — see the picture above), the paper edition did not have a story on the handover, nor did the New York Times.

Remember, these were the papers that jumped on the leak of a Marine Corps Intelligence report in September 2006 that Anbar was lost. Wrote the NYTimes:

As the situation has deteriorated, insurgent attacks have increased. The report describes Al Qaeda in Mesopotamia as an “integral part of the social fabric” of Anbar.

Aside from being flat out wrong on that assessment, the stories painted a grim picture of the situation in Anbar and help solidify impressions (with an election coming up just a month later) that Iraq was a lost cause.

But how times have changed. Anbar is flat out boring to go visit anymore.

While the bombings show al-Qaeda is still not completely defeated, the progress made against the enemy cannot be denied. Hell, even some in academia admit it:

This week’s spate of attacks on political gatherings is not a sign of a resurgent Al Qaeda in Iraq, said Bruce Hoffman, a counter-terrorism expert at Georgetown University.

The insurgency is settling in for a long campaign, Hoffman said. The attacks demonstrate that it can still terrorize even though its strategy of mobilizing the population and holding down territory has failed, he said.

But there is one less al-Qaeda leader to help lead that insurgency. Overlooked by the MSM was the death of the leader of al-Qaeda in Mosul by American forces:

Khalaf “rose through the ranks to become the overall emir of Mosul,” the US military stated. He served as al Qaeda’s military commander in Mosul during the rule of former al Qaeda leader Abu Musab al Zarqawi.

He would meet with senior al Qaeda leaders in Mosul and the Jazeera desert “coordinating and ordering dozens of attacks against Iraqi citizens, Iraqi forces and Coalition forces.”

Khalaf had close ties to foreign al Qaeda terrorists, according to his associates in custody. “Khalaf traveled much of the time with foreigners,” the US military said. Abu Khalud, his aide wearing the suicide vest at the time of his death, was a Syrian national.

Further signs of progress in Iraq (and ignored by the MSM) include various small villages getting water treatment facilities:

Al Haboosh, Iraq – For the first time ever, a small village in Dhi Qar province will soon have access to clean drinking water.

Sheik Abdul Razak says his community is “very happy” about the ongoing work. The project includes a 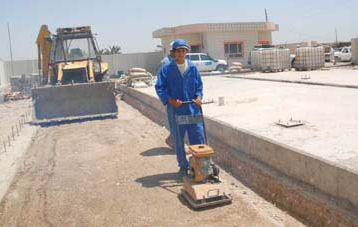 50-cubic-meter per-hour water treatment plant with a reverse osmosis unit, 1000 meters of pipe connecting that plant to the community’s existing water network, and an above ground storage reservoir for the treated water.

The project is being overseen by Construction Representative Toni Graves with the Gulf Region South District, U.S. Army Corps of Engineers. “They’re very excited seeing it being built and anxious to see it
finished.” The construction, which started last fall, is currently 40 percent complete and should be operational by September.

Graves, who is overseeing the construction of ten water treatment plants in Dhi Qar, says this project is her favorite because of the enthusiastic pride she sees every time she visits the project as town
leaders and children stop by. “I think it’s wonderful we’re able to help them get access to a fundamental necessity. They’re always kind and friendly, delighted to see it taking shape, and grateful for what we’re doing.”

And more electricity in Baghdad: 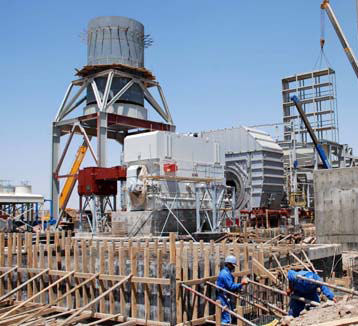 Baghdad, Iraq – “The impact of this project for the Iraqi people is that electricity means life, new life. This electricity brings more homes, more water, more laborers, more farming, more markets. It is life for Iraq,” says an Iraqi engineer at the Qudas electric power station.

The Gulf Region Division oversees the $160 million installation of two new gas turbines and their auxiliary modules that will generate 200 megawatts of electricity, sufficient to power approximately 180,000 Iraqi homes.

Work at Qudas is lively with 300 to 400 workers per day busy on the job site. A second evening shift was added to increase productivity. To increase turbine generator efficiency, an evaporative cooling
system was installed on the inlet side of each turbine. This modification, being used for the first time in Iraq, cools the turbines’ incoming air and adds water vapor by a series of water-soaked panels, much like “swamp coolers” cool hot, low humidity air in the Southwest United States. Ultimately, this evaporative cooling process gives the turbine more explosive power in the combustion chamber.

And lastly Iraq is starting a program to help eliminate unemployment among the youth in Iraq:

“The current orientation by the government is to back citizens through providing services and jobs for all categories in different areas of the country,” Hashimi told Aswat al-Iraq – Voices of Iraq – (VOI).

He pointed out that the project, to be bolstered by the Multi-National Force (MNF) for a period of three months, will be waiting for government financial appropriations.

No bias there huh?