This can be added to the growing mound of evidence that Obama has let all this “chosen one” talk get to his head:

At a discussion with a dozen Democratic governors in Chicago on Friday morning, each of the governors was identified with a small name plate but Senator Barack Obama sat behind a low rostrum to which was attached an official-looking seal no one had seen before.

It is emblazoned with a fierce-looking eagle clutching an olive branch in one claw and arrows in the other and is deliberately reminiscent of the official seal of the president of the United States. Around the top border are the words “Obama for America;” across the bottom is the campaign’s Web address. It also contains the logo of the Obama campaign, variously interpreted as a sunrise or a view down an open road. The similarity can be seen better below: 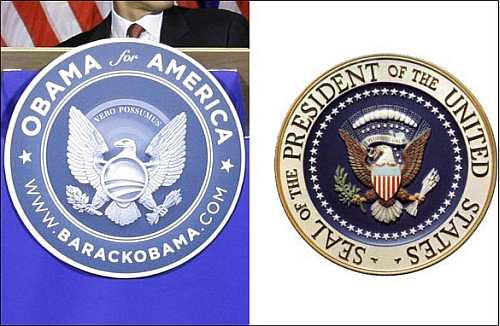 He feels so special, so deserving of some kind of special status that he now has own Presidential seal. The arrogance is mindboggling.

And get ahold of the gayest of motto’s above the eagle. “Truly we’re able” in Latin which translates as “Yes, we can.”

The motto is so banal and saccharine sweet that translating it into Latin and sticking it on a faux presidential seal can only be seen as an attempt to attach more gravitas to a candidate than he deserves. And perhaps that’s the ultimate reason for the entire exercise.

John McCormack wonders if its legal:

(b) Whoever, except as authorized under regulations promulgated by the President and published in the Federal Register, knowingly manufactures, reproduces, sells, or purchases for resale, either separately or appended to any article manufactured or sold, any likeness of the seals of the President or Vice President, or any substantial part thereof, except for manufacture or sale of the article for the official use of the Government of the United States, shall be fined under this title or imprisoned not more than six months, or both.

And I wonder how in the world this man, with almost no experience, no character, and very bad judgement believes he is deserving of this special status?