How Pres. Clinton Marketed the Invasion of Iraq

Much has been made for the past six years of President Bush and his administration’s efforts to convince the American people and the world of the necessity to invade Iraq and remove Saddam Hussein. It is an issue that has left few stones unturned, and as such, the time has come for history to examine the role that President Clinton and officials from his administration and the era of his reign had in marketing the idea that Saddam Hussein was a WMD threat. 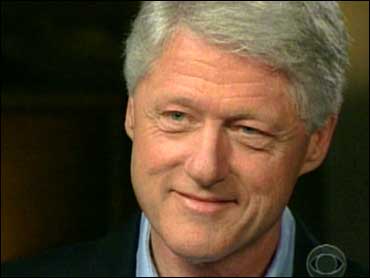 The rhetorical buildup to the invasion of Iraq started with the inclusion of Iraq in the famous Jan 2002 Axis of Evil comment made at the State of the Union address. However, there was almost no more rhetoric from the Bush Administration for the following 9 months-not until his Sept 12, 2002 address to the United Nations where President Bush challenged the UN to peacefully resolve the question of Saddam’s missing WMD after 11years of UN failure to do so. Immediately after that speech, the military buildup began in preparation for the UN’s typical failure re Saddam’s Iraq. Similarly, so too did the bi-partisan rhetoric and claims that Saddam’s Iraq had WMD still hidden from the UN. It was at this point when officials from the former Clinton Administration, President Clinton, and Senator Clinton went to work to justify and promote the invasion of Iraq.

“We know that he has stored secret supplies of biological and chemical weapons throughout his country.”
– Al Gore, Sept. 23, 2002

On October 2, 2002, a classified National Intelligence Estimate was put together and presented to Congress by the 16 different American intelligence agencies. Only a handful of Senators and Congressmen signed in to view the classified report. Still, somehow, President Clinton (who was in England at the time and couldn’t possibly have seen the report) promoted the invasion of Iraq.

The restrictions imposed in 1998 are not acceptable and will not do the job. There should be a deadline and no lack of clarity about what Iraq must do. There is no doubt that Saddam Hussein’s regime poses a threat to his people, his neighbours and the world at large because of his biological and chemical weapons and his nuclear programme. They admitted to vast stores of biological and chemical stocks in 1995.
-Former President Bill Clinton 10/2/02 at British Labour Party Conference

Two days later, a declassified version of the National Intelligence Estimate was presented to Congress. It gave an overview of the intelligence on Saddam’s WMD, but the sections on how substantive and reliable various intelligence claims were was left out/classified so that the world wouldn’t know how weak, limited, and thin the intelligence was at the time. That didn’t matter to some people-like Sen. Hillary Clinton. She had the unique “experience” of having been in the White House during all those years of Saddam’s WMD hide/seek game, and the unique ability to ask her husband as well as formed Administration officials (many of whom were also serving in the Bush Administration) how reliable the intelligence was.

“In the four years since the inspectors left, intelligence reports show that Saddam Hussein has worked to rebuild his chemical and biological weapons stock, his missile delivery capability, and his nuclear program. He has also given aid, comfort, and sanctuary to terrorists, including al Qaeda members … It is clear, however, that if left unchecked, Saddam Hussein will continue to increase his capacity to wage biological and chemical warfare, and will keep trying to develop nuclear weapons.”
– Sen. Hillary Clinton (D, NY), Oct 10, 2002

Other Clinton Admin officials were privately telling Democrats who were about to authorize the invasion that Saddam had WMD:

“I didn’t take Bush’s word for whether or not they had weapons of mass destruction in Iraq. I went to the CIA. I sat down across from George Tenet. I said, ‘George, I have to vote, you don’t. Are you worried that they have weapons or the components of weapons or the ability to quickly make weapons?’ He said ‘yes’ emphatically. I got the same thing from high officials in the Clinton administration who had worked in the security area.”
-Congressman/Presidential candidate Dick Gephardt Nov 17, 2003

Years after the invasion, we found out that President Clinton went all around Europe after his address to the British Labour Party where he claimed Saddam was a threat. President Clinton apparently went to individual European leaders and promoted the war to them.

Polish President Aleksander Kwasniewski, during a press conference last week, said “Many months before [the] Iraqi action, I met [the] predecessor of [chief U.N. weapons inspector] Hans Blix in Warsaw … He told me [a] very important thing: that Saddam had these weapons or is ready to produce these weapons. Because to have such [an] impression that he has mass destruction weapons is a part of his doctrine, to keep … power in Iraq and to be strong in the region. So I think it’s very difficult today to judge how it was when he … decided to continue this project of mass destruction weapons … Absolutely, Iraq is ready to produce if it’s necessary to keep the power of and dictatorship of Saddam and to play such [an] important role in the region.”
-“On Iraq WMD: Did the President Lie?” by Laurence A. Elder

Even after it was clear that a WMD threat from Saddam wasn’t found in the form of stockpiles, President Clinton (like President Bush) continued to claim Saddam had stockpiles of WMD

“…it is incontestable that on the day I left office, there were unaccounted for stocks of biological and chemical weapons. We might have destroyed them in ’98. We tried to, but we sure as heck didn’t know it because we never got to go back there.”
-President Clinton, Larry King Live 7/22/03

…and President Clinton continued to meet with foreign heads of state selling the idea that Saddam had WMD stockpiles even a year after the NIE had been presented to Congress…and not him.

“When Clinton was here recently he told me he was absolutely convinced, given his years in the White House and the access to privileged information which he had, that Iraq possessed weapons of mass destruction until the end of the Saddam regime.”
-Portuguese Prime Minister Jose Manuel Durao Barroso re: the 10/03 visit from fmr President Clinton

President Clinton continued to argue that Saddam had WMD even into 2004:

* In June 2004, Bill Clinton Said President Bush Had The Responsibility To Make Sure Iraq’s Chemical And Biological Weapons Did Not Get In The Hands Of Terrorists. “After 9/11, let’s be fair here, if you had been President, you’d think, Well, this fellow bin Laden just turned these three airplanes full of fuel into weapons of mass destruction, right? Arguably they were super-powerful chemical weapons. Think about it that way. So, you’re sitting there as President, you’re reeling in the aftermath of this, so, yeah, you want to go get bin Laden and do Afghanistan and all that. But you also have to say, Well, my first responsibility now is to try everything possible to make sure that this terrorist network and other terrorist networks cannot reach chemical and biological weapons or small amounts of fissile material. I’ve got to do that. That’s why I supported the Iraq thing. There was a lot of stuff unaccounted for. So I thought the President had an absolute responsibility to go to the U.N. and say, ‘Look, guys after 9/11, you have got to demand that Saddam Hussein lets us finish the inspection process.’ When you’re the President, and your country has just been through what we had, you want everything to be accounted for.”
-Bill Clinton, “His Side of The Story,” Time, 6/28/04

Why? Why did President Clinton, his wife Senator Clinton, other Clinton Administration officials, and so many other Democrats continue to claim Saddam was a WMD threat? Was it that they didn’t have access to the same intelligence as the White House? Was it because they wanted to justify their decade+ of bombing Iraq, sabre rattling, etc which the 911 Commission report claims was what set Osama Bin Laden to start killing Americans? Perhaps they didn’t want to carry the now defunct “Bush Lied” propaganda that the far left desperately wanted to hear?

We must never forget that the selling of the invasion of Iraq was a bi-partisan marketing effort, and just as President Bush has been held to account in the 2004 election, so too must others someday, equally be held to account.

THE LIE THAT BUSH LIED

The Accelerating Purge...Buckle up, America. This only gets worse from here.