Of the 19 big battleground states Hillary Clinton has won 14 of them. Now count West Virginia 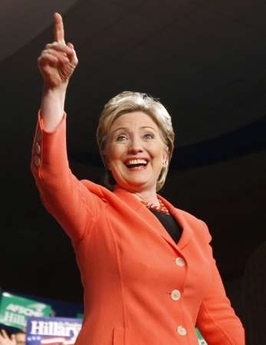 Hillary Rodham Clinton coasted to a large but largely symbolic victory in working-class West Virginia on Tuesday, handing Barack Obama one of the worst defeats of the campaign yet scarcely slowing his march toward the Democratic presidential nomination.

She coupled praise for Obama with a pledge to persevere in a campaign in which she has become the decided underdog. “This race isn’t over yet,” she said. “Neither of us has the total delegates it takes to win.”

With votes from 69 percent of West Virginia’s precincts counted, Clinton was winning 66 percent of the vote, to 27 percent for Obama.

Clinton’s triumph approached the 70 percent of the vote she gained in Arkansas, her best state to date.

14 of the 19 battleground states won by her and the MSM and the left are still behind the messiah…he who cannot win.

Doing the math here, if we count the electoral votes from the states she has won up to date she would have about 303, to Baracks 218. Maybe throw in Texas to Barack….he still loses.

Not like I’m complaining mind you….just smiling at their stupidity.