This is the perfect picture to go along with Charles Krauthammer new piece on Obama: 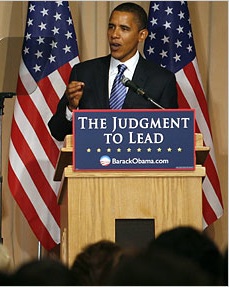 Real change has never been easy. . . . The status quo in Washington will fight. They will fight harder than ever to divide us and distract us with ads and attacks from now until November.

With that, Obama identified the new public enemy: the “distractions” foisted upon a pliable electorate by the malevolent forces of the status quo, i.e., those who might wish to see someone else become president next January. “It’s easy to get caught up in the distractions and the silliness and the tit for tat that consumes our politics” and “trivializes the profound issues” that face our country, he warned sternly. These must be resisted.

Why? Because Obama understands that the real threat to his candidacy is less Hillary Clinton and John McCain than his own character and cultural attitudes. He came out of nowhere with his autobiography already written, then saw it embellished daily by the hagiographic coverage and kid-gloves questioning of a supine press. (Which is why those “Saturday Night Live” parodies were so devastatingly effective.)

Then came the three amigos: Tony Rezko, the indicted fixer; Jeremiah Wright, the racist reverend; William Ayers, the unrepentant terrorist. And then Obama’s own anthropological observation that “bitter” working-class whites cling to guns and religion because they misapprehend their real class interests.

In the now-famous Pennsylvania debate, Obama had extreme difficulty answering questions about these associations and attitudes. The difficulty is understandable. Some of the contradictions are inexplicable. How does one explain campaigning throughout 2007 on a platform of transcending racial divisions, while in that same year contributing $26,000 to a church whose pastor incites race hatred?

From his association with the racist preacher and a corrupt figure like Rezko to his befriending of two terrorists and his statement calling rural folks a bunch of bigots who cling to guns and religion….I think we can all safely say his judgement is called into question. Now that it is he suddenly complains that its all “silliness and the tit for tat.”

Some people say we all associate with those who may not be the best people in the world. True enough. But we are not running for President of the United States.