Innuendo Filled Hit Piece On McCain From The NYT’s

Funny how the New York Times will put up a story on Page 1 of their paper that alleges legal land swap deals were done at the urging of McCain. Land swap deals that did not benefit him at all. But they ignored the Harry Reid land swap 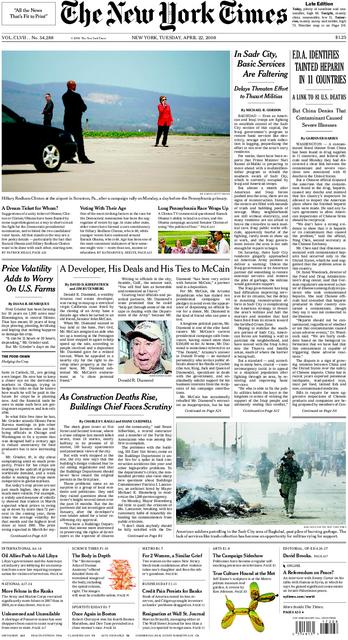 scandal that DID benefit him and his family directly.

A longtime political patron, Mr. Diamond is one of the elite fund-raisers Mr. McCain’s current presidential campaign calls Innovators, having raised more than $250,000 so far. At home, Mr. Diamond is sometimes referred to as “The Donald,” Arizona’s answer to Donald Trump — an outsized personality who invites public officials aboard his flotilla of yachts (the Ace, King, Jack and Queen of Diamonds), specializes in deals with the government, and unabashedly solicits support for his business interests from the recipients of his campaign contributions.

Mr. McCain has occasionally rebuffed Mr. Diamond’s entreaties as inappropriate, but he has also taken steps that benefited his friend’s real estate empire. Their 26-year relationship illuminates how Mr. McCain weighs requests from a benefactor against his vows, adopted after a brush with scandal two decades ago, not to intercede with government authorities on behalf of a donor or take other official action that serves no clear public interest.

In California, the McCain aide’s assistance with the Army helped Mr. Diamond complete a purchase in 1999 that he soon turned over for a $20 million profit. And Mr. McCain’s letter of recommendation reinforced Mr. Diamond’s selling point about his McCain connections as he pursued — and won in 2005 — a potentially much more lucrative deal to develop a resort hotel and luxury housing.

In Arizona, Mr. McCain has helped Mr. Diamond with matters as small as forwarding a complaint in a regulatory skirmish over the endangered pygmy owl, and as large as introducing legislation remapping public lands. In 1991 and 1994, Mr. McCain sponsored two laws sought by Mr. Diamond that resulted in providing him millions of dollars and thousands of acres in exchange for adding some of his properties to national parks. The Arizona senator co-sponsored a third similar bill now before the Senate.

Lots of innuendo throughout the whole article but no evidence of any wrongdoing. None, nada, zip. But the problem with this kind of thing is that it takes lots of work to counter it, so it gets stuck into peoples heads at the water cooler that there was some shady land deals done with McCain’s blessings.

Thankfully Ed Morrissey did some of the legwork:

the legislation McCain sponsored didn’t require the sale of the parcels at issue in Rutenberg’s article at all. It authorized the Secretary of the Interior to swap land as deemed necessary and beneficial. Neither McCain nor his family had any personal stake in the land deals that Donald Diamond negotiated with Interior, nor did McCain write legislation requiring Interior to sell anything at all to Diamond. Rutenberg carefully constructs this allegation for deniability:

Do you notice how that’s phrased? Rutenberg hedges his allegation by noting that McCain sponsored bills that authorized land exchanges, not mandated them. In fact, land exchanges are rather common, and get conducted frequently to add territory to federal park areas. Even Rutenberg notes that they usually serve the public interest. He also reports that the GAO advised Congress to discontinue them, but that was six years after the last of the two bills that McCain sponsored.

In the events, McCain’s legislation had broad support from both business interests and the environmental community. The Sierra Club endorsed both bills at the time, although Rutenberg has them complaining now. The Tucson Audubon Society supported the 1994 bill, which makes the pygmy owl issue rather moot (McCain has supported the protection of the pygmy owl). The National Parks and Conservation Association also backed both bills.

The rest of the article gets into what could best be described as “constituent services”. Rutenberg makes a mountain out of the molehill of McCain’s letters of recommendation for Diamond. In the letter regarding Fort Ord and the sale of golf courses, McCain included the following proviso:

Let me state at the outset that I desire no action to be taken on this matter which would be inconsistent with existing rules, regulations, and ethical guidelines, or that could possibly be construed as unfair or inappropriate. Nor do I expect preferential treatment for any single interest. I expect only such action which is in the best interests of the country.

McCain also refused to make phone calls to the city of Seaside on behalf of Diamond. Letters of recommendation for a constituent in a business deal hardly rises to the level of intercession, but a phone call would have been seen as exactly the kind of intervention McCain finds inappropriate. Despite Diamond’s status as a contributor to his campaigns, McCain refused to take that kind of action, and Diamond proceeded on his own.

Wow….now that deserves front page coverage huh? But lets look at the Harry Reid story and compare and contrast. Reid brought land in Las Vegas from the Del Webb company which had obtained it from a complicated land swap deal with the government. Reid had written letters in the past to encourage land swap deals with Del Webb, where one of his former aides worked.

In 1994, Reid wrote a letter with other Nevada lawmakers on behalf of Del Webb, and then met personally with a top federal land official in Nevada. That official claimed in media reports he felt pressured by the senator. Reid denied any pressure.

The next year, Reid collected $18,000 in political donations from Del Webb’s political action committee and employees. Del Webb’s efforts to get federal land dragged on.

Once the land transfer deal was done Reid scooped it up. But the land was only zoned for residential and he wanted it rezoned for commercial use. Problem was that the Career zoning officials objected and the town board in Spring Valley also rejected the rezoning. But have no fear, the Clark County Commission stepped in and approved it. Left unreported was the fact that Harry Reid’s son sits on that Commission.

Once that is done he sells it to a shell company owned by a friend in which he had a financial stake for the exact price he paid for it. Reid didn’t disclose this sell on his annual public ethics report, and for good reason. That company then sold the newly rezoned property and Reid took home 1.1 million dollars, three times the amount he paid for it.

You would think this kind of deal in which he benefited greatly would garner front page coverage, but not so with the New York Times. Instead a story that doesn’t show ANY evidence that McCain is corrupt but does show he sent a few letters on behalf of a constituent makes it to the front page. I’m sorry, not all constituent help is corrupt and in this case he helped a friend in a matter which he felt was in the best interest of the US, with the Sierra Club’s blessing, and he received no direct benefit from it.

Did the NYTimes EVER put the stories about Rev. Wright or Ayers on the front page?

you have to love how one sided the media is. it can start to make one paranoid.