A great sermon by Hamas on the eve of President Carter’s visit to terrorists:

A sermon last Friday by a prominent Muslim cleric and Hamas member of the Palestinian parliament openly declared that “the capital of the Catholics, or the Crusader capital,” would soon be conquered by Islam.

The fiery sermon, delivered by Yunis al-Astal and aired on Hamas’ Al-Aqsa TV, predicted that Rome would become “an advanced post for the Islamic conquests, which will spread though Europe in its entirety, and then will turn to the two Americas, even Eastern Europe.”

“Allah has chosen you for Himself and for His religion,” al-Astal preached, “so that you will serve as the engine pulling this nation to the phase of succession, security and consolidation of power, and even to conquests through da’wa and military conquests of the capitals of the entire world.

“Very soon, Allah willing, Rome will be conquered, just like Constantinople was, as was prophesized by our prophet Muhammad,” he added.

And the man who has been duped by everyone had a grand ole’ time laying a wreath at the big kahuna of terrorists, Yasser Arafat: 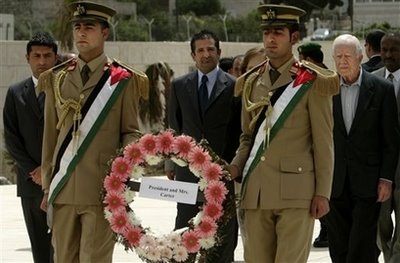 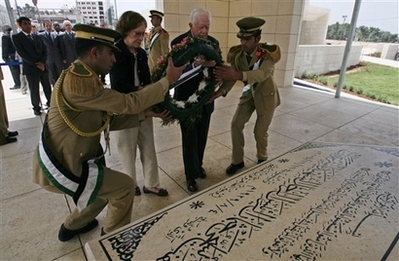 And what visit to Hamas wouldn’t be complete without some hugs:

At a reception in the West Bank town of Ramallah organized by Carter’s office, the former president hugged Nasser Shaer, a senior Hamas politician, meeting participants said. Embraces between men are a common custom in Arab culture.

“He gave me a hug. We hugged each other, and it was a warm reception,” Shaer told The Associated Press. “Carter asked what he can do to achieve peace between the Palestinians and Israel … and I told him the possibility for peace is high.”

What a horrible horrible gesture. How about laying a wreath at the victims of Arafats tyranny instead Jimmy? But no, he pays tribute to those who deserve only our scorn.

Yasser Arafat fought for the advancement of the Palestinians and other just causes in the world, former US president Jimmy Carter said after laying a wreath Tuesday on the grave of the deceased Palestinian Authority chairman in Ramallah.

Carter was greeted at the gravesite by Abed Elrahim, general secretary of the Palestinian presidency, who said the Palestinians hope to transfer Arafat’s bones to Jerusalem.

The former American president, who is on a week-long tour of the region, also met with Nasr a-Din Shaar, Hamas’ deputy prime minister and education minister in Ismail Haniyeh’s government. The two embraced and kissed each other warmly.