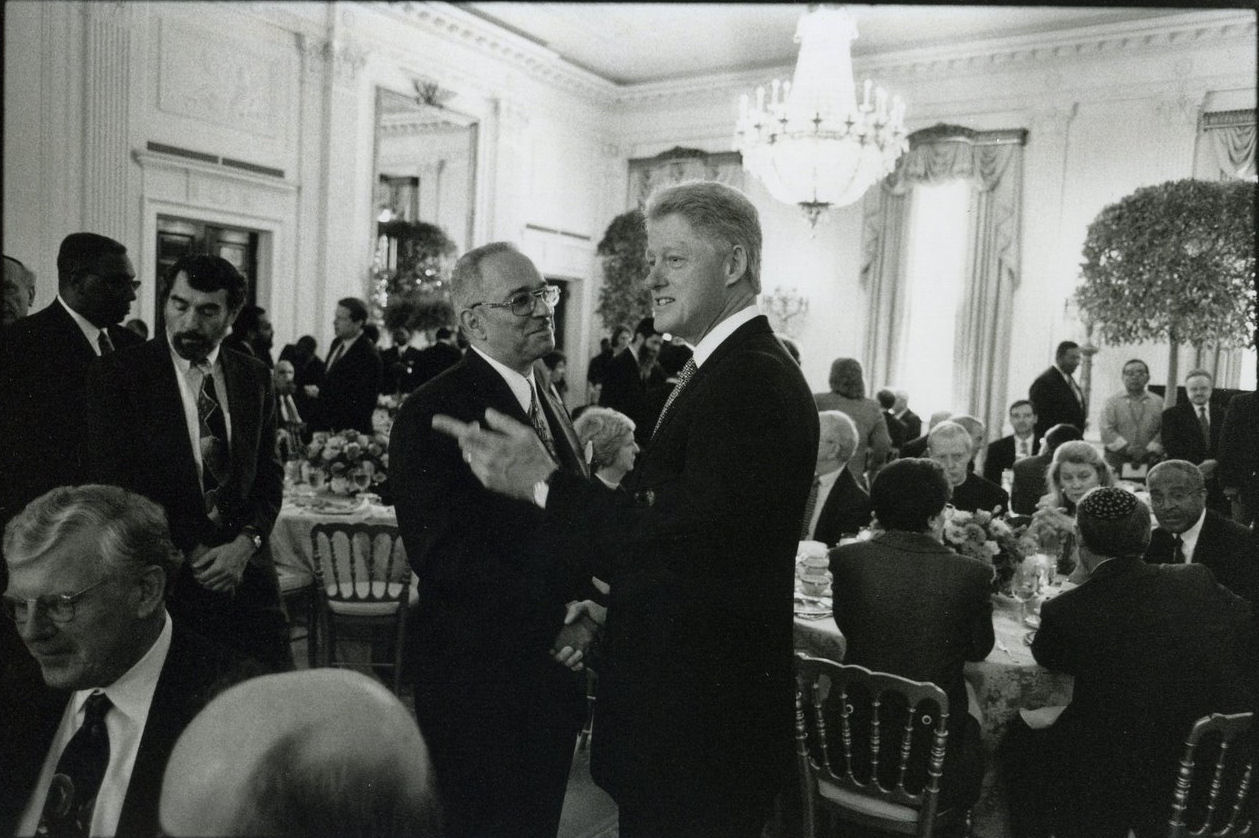 Recognize who is with Bill here from a 1998 picture?

And an anonymous blog set up to defend his church offers some compelling photographic evidence of this: A photograph of Wright and President Clinton, which it says was taken on September 11, 1998 — the date of a White House gathering for religious leaders.

Hillary Clinton, according to her recently-released schedule for the day, was present at the gathering.

And in other Hillary news, did you know she was part of the right-wing conspiracy that follows the troubled youth when they stray from the mindmeld?

There’s a reason Hillary Clinton has remained relatively silent during the flap over intemperate remarks by Barack Obama’s former pastor, Jeremiah Wright. When it comes to unsavory religious affiliations, she’s a lot more vulnerable than Obama.

You can find all about it in a widely under-read article in the September 2007 issue of Mother Jones, in which Kathryn Joyce and Jeff Sharlet reported that “through all of her years in Washington, Clinton has been an active participant in conservative Bible study and prayer circles that are part of a secretive Capitol Hill group known as “The “Fellowship,” also known as The Family. But it won’t be a secret much longer. Jeff Sharlet’s shocking exposé The Family: The Secret Fundamentalism at the Heart of American Power will be published in May.

Sean Hannity has called Obama’s church a “cult,” but that term applies far more aptly to Clinton’s “Family,” which is organized into “cells”–their term–and operates sex-segregated group homes for young people in northern Virginia. In 2002, Sharlet joined The Family’s home for young men, forswearing sex, drugs and alcohol, and participating in endless discussions of Jesus and power. He wasn’t undercover; he used his own name and admitted to being a writer. But he wasn’t completely out of danger either. When he went outdoors one night to make a cell phone call, he was followed. He still gets calls from Family associates asking him to meet them in diners–alone.

Wow! Who knew all this time Hillary was a bible thumping conservative…..

creepy, they are all crazy. this is way more scary than write and his hate.

I call caption contest!
Clinton (to himself), “He can’t hate me. I’m a black President.”

no no no, write is asking if he gave him aids. since the white man created it to bring down the black man. NOT!!!!

My caption contribution:
Clinton: “And over that way is the Lincoln Bedroom…”
Wright: “Ah yes, yet another room named after an oppressor of the black people, here in this ‘White’ House.”

I recall Conservatives telling us that the pictures of George W. Bush with Ken Lay meant nothing either. Regardless if you hate Barak Obama or not, this picture makes no difference one way or the other.

Philly: You might consider the motives of the people who put this photograph out.

Think about it. Why did they do it?

The New York Times posted the same photograph and said it had been provided by the Obama campaign.

You might disrupt Steve’s fragile world view that his masters have so carefully crafted….

This is an attempt to tar Bill and by extension Hill with association to Wright. But it will be a dud.

One would normally expect to see a Dem President inviting religious figures from the large congregations in major cities to firm up Dem support.

Occasional political visits do not compare to 20 years of close association.

This was before the insane 9/11 “GodDamnAmerica” stuff. Also this picture obviously originates from Wright himself.

I agree. (gasps abound, yes?). I don’t care who any of them “associate” with. I care if that association or relationship has molded their policy stance.

Obama could be friends with OBL or, on another extreme, with God himself. I still will won’t like his socialist view for our future. And it is on that, alone, I find him abhorrent.

“Monica? I think I saw her over there with Governor Spitzer. . . .”

Ok, so it looks like the people want a caption contest….well, I never said I wasn’t a man of the people.

Philly Steve, it’s not that we “hate” Barrack (or at least I can speak for myself personally, that I don’t). What I do think, is that he is misguided, and ignorant of certain realities in this world. In our free American society, one is free to be misguided and naive, it is his Constitutionally insured right to be so. However, when he presumes to become President of the United States with those attributes, that makes him dangerous. As such, whether you believe our opinions don’t matter either way, I for one intend to point out his flaws, toxic associations, and the extraordinary efforts the MSM will go to see him elected; good conscience requires nothing less.