A big salute to this lady: (h/t UrbanGrounds)

CAMP SALERNO, Afghanistan — A 19-year-old medic from Texas will become the first woman in Afghanistan and only the second female soldier since World War II to receive the Silver Star, the nation’s third-highest medal for valor.

Army Spc. Monica Lin Brown saved the lives of fellow soldiers after a roadside bomb tore through a convoy of Humvees in the eastern Paktia province in April 2007, the military said.

After the explosion, which wounded five soldiers in her unit, Brown ran through insurgent gunfire and used her body to shield wounded comrades as mortars fell less than 100 yards away, the military said. 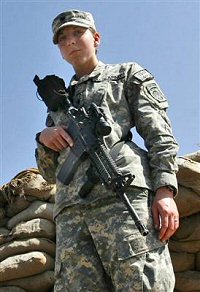 “I did not really think about anything except for getting the guys to a safer location and getting them taken care of and getting them out of there,” Brown told The Associated Press on Saturday at a U.S. base in the eastern province of Khost.

Brown, of Lake Jackson, Texas, is scheduled to receive the Silver Star later this month. She was part of a four-vehicle convoy patrolling near Jani Kheil in the eastern province of Paktia on April 25, 2007, when a bomb struck one of the Humvees.

“We stopped the convoy. I opened up my door and grabbed my aid bag,” Brown said.

She started running toward the burning vehicle as insurgents opened fire. All five wounded soldiers had scrambled out.

“I assessed the patients to see how bad they were. We tried to move them to a safer location because we were still receiving incoming fire,” Brown said.

“I did not really have time to be scared,” Brown said. “Running back to the vehicle, I was nervous (since) I did not know how badly the guys were injured. That was scary.”

The military said Brown’s “bravery, unselfish actions and medical aid rendered under fire saved the lives of her comrades and represents the finest traditions of heroism in combat.”