The Problem is not America nor the Bush Administration

“We want to be able to love America again,”
German Chancellor Helmut Kohl, in an editorial for Die Zeit newspaper. 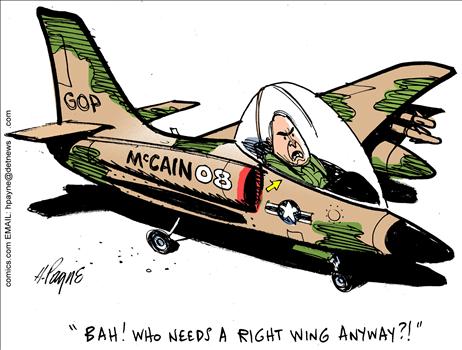 Although Hugh Hewitt found something in it to be encouraged by a McCain presidency, Laura Ingraham (who has a serious case of McCDS and conservative elitism) pointed out the other day the same fault that I see in the interview: the unwillingness on the part of John McCain, the straight shooter, to repudiate or challenge the premise of the questions. I found them rather flawed and insulting. I boldened the parts in this excerpt that really made me squirm:

SPIEGEL: Senator McCain, Europe is reserving a lot of hope for the next president of the United States. Will you try to win back trust in America around the world?

McCain: I know most of the leaders in Europe and other parts of the world and I have a long record of my positions and my ability to work together with our allies. I think I will start out with a level of credibility.

SPIEGEL: America has lost a lot of friends because President George W. Bush angered, indeed outraged, them. He allowed human rights to be violated at Guantanamo Bay, and he dismissed the joint effort to combat global warming. Under a President McCain, could we expect a change of course?

SPIEGEL: So is America coming back to renegotiate the Kyoto Protocol?

McCain: I believe America is going to enter into negotiations to try to reach a global agreement. But, as I said, that agreement must include India and China, two of the emerging economies of the world. We would be foolish not to do so.

SPIEGEL: Will America attempt to go it alone less frequently in the future?

McCAIN: Well, we all hope that America will be multilateral again in the future. There were times when the United States acted unilaterally, but I think we would all prefer to work in concert with our friends and allies.

SPIEGEL: What role will the United Nations play? Bush always ignored the UN.

McCain: The United Nations always plays an important role. But right now we are having to deal with a Russia that is clearly intent on blocking action. That’s why the UN must act in a league of democracies that share our values and our common principles.

I suppose it wouldn’t be very presidential for McCain to give the interviewer the middle finger and begin with, “Listen dipstick…”; nor realistic to hope for it from any U.S. politician. But for someone who fancies himself a straight talker with a reputation for being hot-tempered, it certainly would be nice to see him exercise some of that on behalf of conservative America, rather than against it.

He could have been polite about it, and challenged the premise of the question. The fact that he wasn’t and didn’t, is telling.

I didn’t even read this article, just the by-line. I could care less is Kohl likes “my” country EVER! His “country” has such a “great” record, doesn’t it! The majority of people in the USA quit listening to Europe along time ago!

Regarding McCain’s attempts to consolidate the Party:

Dear John,
Any GOP candidate who wants to “consolidate” the party, and who refuses to
use a nationally televised debate v. other GOP’ers to do so, is either:
1. too weak and/or too lame
2. giving lip service to the idea of “consolidating” the Party, and is so
foolish that he actually believes he can win the National Elec. w/o
consolidating it
3. is lying when he says he will out-campaign, out-debate and out-perform
the Dem’s – if you can’t do it in your own camp, you can’t do it against
the opposition.

“Good luck” with your continued attempts to pressure the thinking American
public & smart Republicans into backing you without you doing the actual
work. BTW, I’m not an evangelical, I’m more of a New Age spiritualist who
disagrees w/Huckabee on his family values platform, so you’ve gotta ask
yourself, “Why isn’t she voting for me?”

Maybe you should give me the decency and respect of telling me why I
should vote for you – in a debate v. your only true opponent – Huckabee –
without the Romney static. In my eyes, along with all of my friends – who
were former Rudy & Mitt supporters & who STILL don’t like you & yet
believe Mike won’t make it – you never won any of the debates.

John, if you fail in a Feb 08 GOP Debate, you sure as heck are going to
fail in the Fall. So, you might as well debate now and reach a conclusion
of:
1. You’ve got to improve your debating skills
OR
2. You’ve got to withdraw because you’ll cause the Party to fail in Nov.

With regard to your debate style & discussion of substance beyond the
bullet points & national security – the line of “just ask my friend _____,
he’ll tell you how tough I am on ____, ” – As Dr. Phil says, “How’s that
workin’ for ya?”

[And, woe to the “king” who is deluded by the “yes-men” with whom he
surrounds himself.]

BTW, in case you think John McCain would, in part, retort with the idea that he’s not asking Huckabee to withdraw, here’s a quote from an actual memo sent to his supporters on Feb. 12, 2008, from Rick Davis, his campaign manager, which, of course, is a blatant lie:

“With only 774 delegates left on the table after tonight, Governor Huckabee cannot win the Republican nomination for president.”

A very loud, public retraction, complete with a copy to all of his supporters, is in order.