Just finished watching Bush give his final STOU and it was a good one. I loved the line “The IRS takes checks and money orders” to those who say they would be glad to pay the higher tax once those tax cuts expire. Nice! And it’s the truth. You don’t mind paying higher taxes then send your damn money in. Myself, I want to keep as much of what I earn as possible….but thats just me.

His line in the sand about vetoing a bill that raises taxes was outstanding also. His demands for cutting the earmarks into half, awesome!

“We must confront global climate change.”….not so awesome. Bleh.

I have to admit his entitlement riff was right on also. He put up his proposals to fix Social Security and Immigration, don’t like it? Then put up your own and do something about it instead of talk talk talk talk and talk:

There are two other pressing challenges that I have raised repeatedly before this body, and that this body has failed to address: entitlement spending and immigration.

Every Member in this chamber knows that spending on entitlement programs like Social Security, Medicare, and Medicaid is growing faster than we can afford. And we all know the painful choices ahead if America stays on this path: massive tax increases, sudden and drastic cuts in benefits, or crippling deficits. I have laid out proposals to reform these programs. Now I ask Members of Congress to offer your proposals and come up with a bipartisan solution to save these vital programs for our children and grandchildren.

As usual, disagreed with him mightedly about immigration reform, but no surprise there.

A few moments during the speech sticks with me tho, Sheila Jackson-Lee greeting the President of our nation with a “”How are you doing, my brother!”…..disrespectful and disgusting.

The next is when the Democrats stayed sitting when Bush said the following:

Last month, Osama bin Laden released a tape in which he railed against Iraqi tribal leaders who have turned on al Qaida and admitted that Coalition forces are growing stronger in Iraq. Ladies and gentlemen, some may deny the surge is working, but among the terrorists there is no doubt. Al Qaida is on the run in Iraq, and this enemy will be defeated.

No standing o for stating that our enemy, our common enemy, is on the run and will be defeated by our greatest and brightest?

In the past 6 years, we have stopped numerous attacks, including a plot to fly a plane into the tallest building in Los Angeles and another to blow up passenger jets bound for America over the Atlantic. Dedicated men and women in our Government toil day and night to stop the terrorists from carrying out their plans. These good citizens are saving American lives, and everyone in this chamber owes them our thanks. And we owe them something more: We owe them the tools they need to keep our people safe.

One of the most important tools we can give them is the ability to monitor terrorist communications. To protect America, we need to know who the terrorists are talking to, what they are saying, and what they are planning. Last year, the Congress passed legislation to help us do that. Unfortunately, the Congress set the legislation to expire on February 1. This means that if you do not act by Friday, our ability to track terrorist threats would be weakened and our citizens will be in greater danger. The Congress must ensure the flow of vital intelligence is not disrupted. The Congress must pass liability protection for companies believed to have assisted in the efforts to defend America. We have had ample time for debate. The time to act is now.

And he ends with a bang!

The secret of our strength, the miracle of America, is that our greatness lies not in our Government, but in the spirit and determination of our people. When the Federal Convention met in Philadelphia in 1787, our Nation was bound by the Articles of Confederation, which began with the words, “We the undersigned delegates.” When Gouverneur Morris was asked to draft the preamble to our new Constitution, he offered an important revision and opened with words that changed the course of our Nation and the history of the world: “We the people.”

By trusting the people, our Founders wagered that a great and noble Nation could be built on the liberty that resides in the hearts of all men and women. By trusting the people, succeeding generations transformed our fragile young democracy into the most powerful Nation on earth and a beacon of hope for millions. And so long as we continue to trust the people, our Nation will prosper, our liberty will be secure, and the State of our Union will remain strong. So tonight, with confidence in freedom’s power, and trust in the people, let us set forth to do their business. 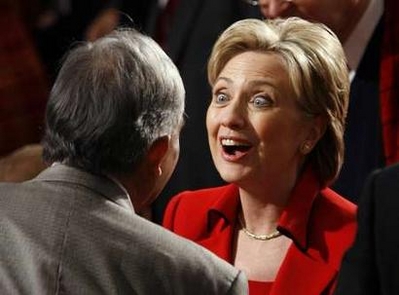 Via Gateway Pundit, some video of the War on Terror part of his speech:

And I’ll let Gateway put up his remarks on the response from Democrats:

Governor Kathleen Sebelius is giving the rebuttal speech from the Kansas State House.

–Americans are losing their jobs(?) 5% unemployment -lower than the Clinton years?
Will you join us, Mr. President?

We’re ready to chart a new course— If Republicans join us we can claim defeat.

Just so typical from the Democrats.