A History of Political Mudslinging and Character Assassination

“If you vote for Nixon, you ought to go to hell.”
-Harry S Truman, campaigning for John F. Kennedy, in 1960

The line from “Give ’em Hell Harry” just cracks me up. Could you just imagine a politician today saying these lines? Especially with a Huckabee background? Actually, similar lines have been expressed to this day. Christopher Hitchens reminds us of this in the WSJ of something Madeleine Albright said that there is: “a special place in hell for women who don’t help each other.” (Translation: Vote Hillary…or else!)

We often hear people bemoan the level of discourse, the “nasty” attack ads, the height of new lows, etc. In truth, we’re carrying on a 208 year-old tradition (In 1789, George Washington ran unapposed; 1792, first political parties formed….4 years later- let the mud fly!) – and I’d say that today we are more civilized, not less….or perhaps, about the same.

Here are other examples:

Hugh Hewitt: Watching Hillary’s campaign go after Senator Obama, does it tell you what you’re in for if she’s the nominee and you’re the nominee?

There’s a new book out, called “Anything for a Vote: Dirty Tricks, Cheap Shots, and October Surprises” by Joseph Cummins. Sounds very entertaining for us political junkies.

You can see a book preview, here.

RT Rider has more, including the famous “Daisy” video ad from Johnson-Goldwater. I bet Democrats would have loved to run it in 2004, replacing “Goldwater” with “Bush”. Oh, waitaminute….Remember the Moveon.org “Bush-Hitler” ad? If you haven’t seen THAT video, you really should. See it here. Some disgusting things should be viewed, to be believed.

And also reprints this from the book: On the Bill Clinton of the 1920’s, Warren G. Harding:

When Republican operatives decided to nominate the fifty-five-year-old Ohio senator, they asked if he had anything hidden in his personal life that would “disqualify” him from winning the presidency. Harding asked for some time to reflect on the question, and he may have pondered that he chewed tobacco, played poker, loved to drink (Prohibition had just been voted in), and was having affairs with not only the wife of one of his friends but also a young woman thirty years his junior, with whom he had an illegitimate daughter. Then he said, nope, nothing to hide, guys — it’s all good.

This site has an archive of political cartoons and ads. 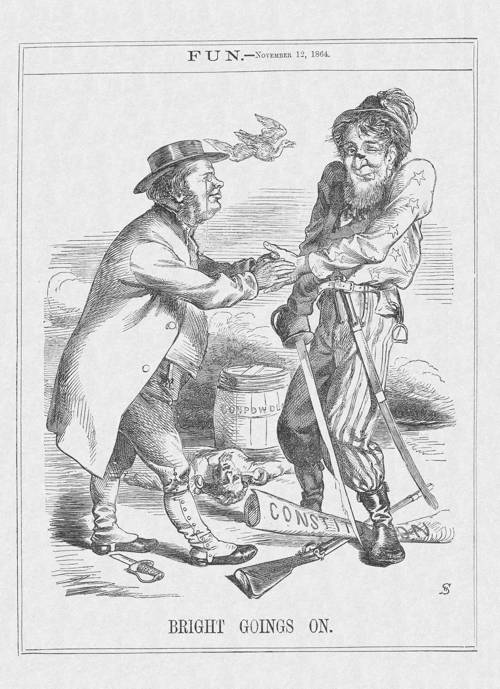 In this cartoon from Fun, a British humor magazine, John Bright shakes hands with President Abraham Lincoln, who appears as a militaristic half-wit stepping on the U.S. Constitution. Bright was a Liberal member of parliament and leading reformer whose Quaker religious beliefs (note his Quaker hat) provoked his intense aversion to slavery. During the American Civil War, he was an outspoken supporter of the Lincoln administration and the Union cause, although his pacifism prevented him from calling for British military intervention on the side of the Union. The fallen man in the cartoon’s background may be Confederate President Jefferson Davis or Uncle Sam.
“A Warning”
Cartoonist: Unknown
Source: Fun
Date: December 3, 1864, p. 115 This ominous cartoon appeared in Fun, the British humor magazine, after Abraham Lincoln’s reelection. The president is depicted as a vengeful warmonger whose prosecution of the Civil War has resulted in extensive loss of life for no apparent gain to the nation.
0 0 votes
Article Rating
Wordsmith