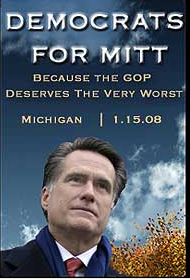 The Daily KOS has come up with a plan to give Michigan to Mitt Romney, which would keep him alive in the race, by telling Michigan Democrats to vote for Mitt:

With a history of meddling in our primaries, why don’t we try and return the favor. Next Tuesday, January 15th, Michigan will hold its primary. Michigan Democrats should vote for Mitt Romney, because if Mitt wins, Democrats win. How so?

For Michigan Democrats, the Democratic primary is meaningless since the DNC stripped the state of all its delegates (at least temporarily) for violating party rules. Hillary Clinton is alone on the ballot.

But on the GOP side, this primary will be fiercely contested. John McCain is currently enjoying the afterglow of media love since his New Hamsphire victory, while Iowa winner Mike Huckabee is poised to do well in South Carolina.

Meanwhile, poor Mitt Romney, who’s suffered back-to-back losses in the last week, desperately needs to win Michigan in order to keep his campaign afloat. Bottom line, if Romney loses Michigan, he’s out. If he wins, he stays in.

And we want Romney in, because the more Republican candidates we have fighting it out, trashing each other with negative ads and spending tons of money, the better it is for us. We want Mitt to stay in the race, and to do that, we need him to win in Michigan.

The jackass is actually right tho. If Mitt does win Democrats will be in the White House in 2009.

But whats sad is that he is even coming up with this plan. Instead of letting Democracy play itself out he wants to ensure a Democrat victory by cheating. Republicans crossed over in 1972 but it didn’t effect the outcome. Wallace would have won anyways.

That is NOT the case here.

What a sorry state the Democrat party is in.

But, if history is any judge, Democrat schemes usually turn out biting them in the ass. Hopefully this is the case here.

If Mitt does win, it doesn’t help him. It exposes him as being more attractive to the far left, and loads his opponents with that ammo.

Childish political move from the lost leftists. sad, but typical too.

All I see on the democrat side is a bunch of young crazies pushing Obama as the 2nd coming of Christ. They are in for a huge shock. I know hundreds of people, a lot of the democrats, and I don’t know one person that will vote for Obama. Voters look throught the fog of BS and see someone who’s only qualification to be POTUS is he’s black and deserves the office. It’s fun to play the game right now but like Russian Roulette it will end with a bang. Just like the now shrinking economy, it boomed until the crazy democrats were elected to run congress. After a year of ‘do nothing’ the economy is failing. Only an idiot will have to ask why?

Should any more of the primaries where Republicans voted in the Democratic primary be mentioned ?? You seem to have failed to mention ALL of the times in the past this has happened.
1972 1/3 of the voters in the Democratic primary were Republicans who voted for George Wallace
In 1998 Republicans again crossed over and voted for Jesse Jackson, assuring him of wide margins in heavily Republican districts.
And in 1998 the Republicans helped the weakest Democrat win the governor’s primary.
It seems that there is a long history of this behavior in MI, but let’s try to put all of the blame on one party. lol
As for Mitt being more attractive to the left, I think that position has to go to McCain. Anti torture, pro amnesty, concerns about global warming are all pretty acceptable to both centrists and leftists, while anathema to the right.
http://www.dailykos.com/

And in 1998 the Republicans helped the weakest Democrat win the governor’s primary.
It seems that there is a long history of this behavior in MI, but let’s try to put all of the blame on one party. lol

Yup, because that is what is happening now. The Democrats are doing it. I’m not hearing any right personality calling for the Republicans to vote for Hillary in the present so right now, in 2008, this call by Kos IS the fault of one party. I find it funny how the Democrats who constantly cry foul about voting shenanigans have no problem voting for someone they oppose just to create shenanigans.

Only the Democrats man.

Mitt is attractive because he would lose to the Dem’s. No way you could say the same about McCain, Rudy or Fred. No, a Mitt or Huckster win would be good news for Dem’s.

But thats neither here nor there. This will have little effect in MI.

On the other hand, maybe the Dems should vote Republican and keep voting Republican. Though that would mean abandoning the Socialist-Democrat party of the far left. It may even bring said far left party back to something near the center instead of a Kos/Move-on/Code Pink/Soros screaming fest.

At least the Republicans allow one to vote for all the candidates in Michigan and the RNC will accept their delegates.

Bet they weren’t expecting a Fred comeback. I’m not up on all the ins and outs of this plan, but what if Huckabee and McCain dont’ do well. What would that do to their plan?

Red states are mostly border states and get most of the ille...
The baby formula shortage looks to be intentional- updated: there's lots of formula for illegals