Why Democrats are Childish

The following is a post I made about 2 or 3 years ago, but which I never published, as it was old news when I discovered it:

Last night, while going through the mail on my gmail account, something caught my eye: it was an ad.

I cut and pasted the link and…..isn’t this just heartwarming: 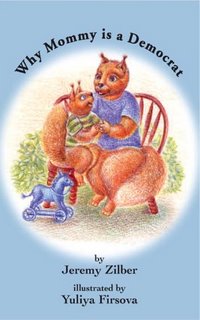 Rotflmao!!! I had completely missed this! I think the book came out a year ago. About the book:

Why Mommy is a Democrat brings to life the core values of the Democratic party in ways that young children will easily understand and thoroughly enjoy. Using plain and non-judgmental language, along with warm and whimsical illustrations, this colorful 28-page paperback depicts the Democratic principles of fairness, tolerance, peace, and concern for the well-being of others. It’s a great way for parents to gently communicate their commitment to these principles and explain their support for the party.

Why Mommy is a Democrat may
look like a traditional children’s
book, but it definitely isn’t just for
children. With numerous subtle
(and not-so-subtle) satirical swipes
at the Bush administration and
the Republican party,Why Mommy
will appeal to Democrats of all
ages!

Finally, a portion of the profits will
be donated to Democratic
candidates and party
organizations, so your purchase
will help make an immediate
difference!

Since it was a Google ad that brought this wonderful book to my attention, I Googled to see what people have had to say about it.

From the testimonials page:

“A wonderful story to show my son what REAL moral values are.”– Erin White-Johnson, Bakersfield, CA

“In a vivid way, this book shows Democrats as still being interested in solving our real problems: hunger, homelessness, war, healthcare. How refreshing!”-Bill White, Longmonts, CO

“The book is charming- with a message even a child can enjoy and understand.”– Debbie Brennan, Moss Beach, CA

Here are some alternative book reviews:

This is definitely slated for the fiction section. If would really be best in a section devoted to various forms of propaganda. This book is all about the indoctrination of young minds, something the libs know a lot about.–Museum of Left Wing Lunacy

Help! Mom! there are liberals under my bed!

That was my post, that never got published. I’ve since seen others blog this as well.

Tuesday night, while reading an email from Mike’s America, I noticed a “sponsored link” ad at the top in my gmail: Bwuahahaha!!!! This is now on my Christmas wish list.

I actually ordered Why Mommy is a Democrat from Amazon, as well as Help! Mom! There are Liberals Under My Bed. I got those books over a year ago, but never even opened them yet. Now I have to figure out where I stashed them.

From the samples of the new book (click to enlarge image): I love it! I know “progressive” liberals like to believe they are “free-thinkers”, sophisticated and intellectual; but really, I find much of their worldview “childish” and idealistic without practicality. Quixotic. They address issues of poverty, homelessness, war, etc. by tilting at windmills, rather than perceiving the real problems. They “think” with their emotions; not rationality.

Yes, I generalize; and yes, I know the same is said by “them” about “us”. And sometimes, they even have a point.  After all, this in itself is a childish post, mocking the child-like worldview of many liberal Democrats.

Hope I’ve given you some ideas on some stocking stuffers! Perhaps to promote truth in advertising the title should be changed to “Why Mommy Wants to Destroy America as We Know It”.

Oh, but such books aren’t propaganda at ALL, right?

Sorry, but thread title says it all, and there’s just no arguing it since it’s about Democrats’ children’s books.

Because of your views about Democrats it must be very difficult to accept the Republican party now being a minority party.

No John, considering the fact the media is fully in bed with lying, power mad dems, and that the republicans failed to maintain conservative priciples of limited government (instead they tried to push ILLEGAL immigrant amnesty and Ted Kennedy’s education and prescription bills on us), combined with proven Dem vote scams in places like Washignton State (among others), it is not surprising at all.

With useless idiots like you running around, it is also not surprising that few on the left have ANY memories past the last television season. You parrot what your socialist masters tell you without thought or even asking who funds them.

If conservatives come out to vote and not stay away to punish the RNC for abondoning them in 2006, the traitorous, totalitarian socialist left will be in for a shock.

Now if the RNC would only BE conservative.

“Because of your views about Democrats it must be very difficult to accept the Republican party now being a minority party.”

Nope. Not at all. Republicans lost power (imo) because they stopped being what they had been in the past, and started to be pork eating machines. Incredibly, the DNC took over and blew em away in terms of lobbyist luvin.

What always amazes me is the depths to which people who call themselves “liberal” will close their minds to other ideas, and the height of the mountain of lies that so-called “Democrats” will accept or excuse from their own party only because:
“Republicans did it first”
“Republicans did it too”
or lately
“Yeah, they suck, but at least they’re not Republicans”

That kind of blind partisanship is what has allowed the DNC to promote all kinds of lies and finger point at Republicans as if they were completely taken, token, or otherwise more pure than anyone with an R next to their title. For example, Hillary promoted, authorized, supported, funded, and demanded more troops for Iraq, but…people still buy it with wide-eyes when she tells em she’s “against the war” and “would end it” (followed a sentence or two later by her commitment to keep combat forces in Iraq-fighting in Iraq-until 2013). Pelosi rants and raves about torture and waterboarding, then we found out she knew and approved (in deeds not words) all along. Reid ordered the senate door shut last year in demand that the Sen Intel Com release its Phase II pt4 investigation into pre-war intel on Iraq, but when Dems take Senate…a year later the report that was nearly complete in April 05…still isn’t out; blocked by dems on the Sen Intel Com. This list of BS goes on and on. They tell you Bush lied, but they themselves escape ALL accountability for intel failures in the Clinton Admin, pre-911, post-911, Iraq, etc. Why?

I myself voted for Clinton twice, and usually for Dems for Congress, but that doesn’t mean I should support them blindly. It makes me even more committed to holding their toes to the fire-BECAUSE I voted for them. Only fools blindly vote D or R and then rant away for one side or the other at the expense of the nation, but why paraphrase FDR, JFK, Truman, and other great Democrats?

“Democrats give police officers and firefighters the tools they need to do their jobs.”

Well that’s the biggest load of garbage I’ve read today. It should read Democrats are the defenders of violent criminals and bureacratic wrist tieing that makes it impossible for police and firefighters to do their jobs.

“Democrats give police officers and firefighters the tools they need to do their jobs.”

That’s why Democrats co-wrote the first Patriot Act, passed the second Patriot Act, reformed the FISA laws, and didn’t object at all to waterboarding when told about it in 2003.

As to firefighters’ tools…I dunno. I just know that Republicans are the root of all evil and cause the global warming that creates so many fires (that’s the party line, right?).

‘Democrats make sure schools have great teachers’?
My, what nonsense.
But as propaganda, these are pretty feeble efforts. Take a look at ‘The Lorax’ if you want a masterpiece of environmentalist kid literature. I can’t help liking the book despite disliking the themes getting pushed.

um….wow! both books are gross…

0
Reply
They All Suck

As bad as these are, the PETA books for kids are almost worse…. If that is possible.

I remember seeing “Why Mommy Is A Democrat” on some web site some time back, and my thought (given that ‘mommy’ is a squirrel) was that “Mommy is a Democrat because she has a brain the size of a walnut.”